The Shooting Of Zachary Nathan Champommier

October 20, 2010
The following is a guest article written by Joseph M. Berrellez, best friend of Zachary Nathan Champommier. Champommier, an honors student, marching band member, and Granada Hills Charter High School class of 2010 graduate, was shot and killed by police officers last July in an incident that prompted questions about officers' decision to use of deadly force against the teen and left many of Champommier's fellow students' faith in police shaken. Champommier's shooting was covered by The Los Angeles Times, LAist, and other outlets linked below. 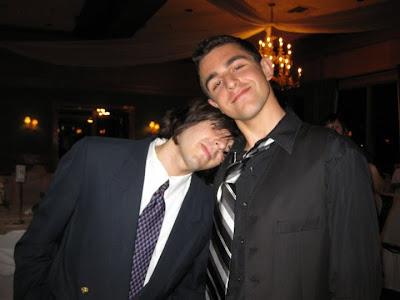 Finally eighteen years old, finally out of high school, finally have a car, finally starting life—until June 24, 2010, when all that was taken from my best friend, Zachary Nathan Champommier. Zac (no “k” at the end because Zachary doesn’t have a “k,” as Zac would say), born January 21st, 1992, was shot and killed in Studio City, California, by law enforcement officers.

Zac’s mother is Carol Champommier, an elementary school teacher who lives in Porter Ranch. Zac had just graduated from Granada Hills Charter High School in June, exploring his options to shape the rest of his life. He was an honor student, member of the orchestra (viola), and a member of the high school marching band, playing tenor saxophone all four years.

The morning of June 25, 2010, I was awakened early by a call from Carol. She was obviously hiding how hysterical she was feeling, and I could hear the shaking in her voice. She told me Zac didn’t come home last night, when he was supposed to be home by eleven o’clock. She said she knew something was wrong, that Zac never did that. Carol threatened to call the police and file a missing persons report. A few of my friends and I tried calling him and others we thought we might find him with. We all agreed that he probably fell asleep at a friend’s house. It wasn’t much longer until I got another call, this one confirming the death of my best friend of four years. Carol found out about the death of her only son only after calling the police to file a report.

I met Zac my freshman year, because I was also in the marching band as an alto saxophonist. At first our personalities conflicted; I thought he was whiney. But we quickly realized we weren’t so different. Zac and I spent a lot of time together talking, joking, laughing, sharing, driving, playing video games, and everything you except teenage friends to do. I came to realize what an amazing and dependable person Zac was. Though he sometimes showed a cold outer shell, he was one of the nicest people I knew. We stayed friends all through high school, and spent much time together even after graduation. We both planned on attending College of the Canyons together for the next coming semester. June 23rd was the last time I saw him.

Most of the articles on this shooting will say Zac “rammed” a police officer with his car, or that he sped off hitting parked cars, was an accomplice to “casing” cars, or even was there buying illegal substances. None of these are true. Let me break it down for you.

It was about 9:30 p.m.,and Zac was parked in a Chipotle and Union Bank/Citi Bank parking lot, close to Laurel Canyon and Ventura Boulevard, meeting a friend to see a movie. The friend was looking for Zac’s car, unaware that he was being watched. A group of plain clothed officers, including a Sheriff’s Deputy, DEA officer, and an LAPD officer were debriefing a warrant they had served earlier in the same parking lot. All wore plain clothes and drove unmarked cars. To the public, they looked like ordinary citizens.

When the plainclothes police saw Zac’s friend peering into their cars trying to find Zac, they assumed he was a criminal, looking to steal, and wasted no time in confronting him about the matter. It is not known what was said, only that things got “rough” between the man and the cop, and the officer pulled his gun on the suspect, ordering him to get on the ground. The other officers rushed in as well. All fine and good police work if Zac’s friend had any way of knowing they were police. But he saw no badge, no ID; nothing but guns in hand and angry faces. According to the The Los Angeles Times, Sheriff’s officials said that the officers “did not have time to identify themselves.”

Shouldn’t that be the first thing they do before confronting anyone?

At this point in time, Zac, who has been waiting in his car, witnessing the events, tried to drive away, as anyone who saw a group of men with guns and no badges would have. We don’t know exactly what happened, since Zac cannot to tell his side of the story, but Zac hit an officer with his car because he dared to escape, or maybe because dared to help a defenseless man.

The officer, who was not seriously injured, got up and fired into Zac’s car, as did, as I understand it, another officer to Zac’s left. The bullets hit Zac in the left shoulder and penetrated his body, killing him. Being struck by a bullet caused him to ram several cars before stopping. Zac Champommier was pronounced dead at the scene. It took authorities over 12 hours to report his death to his worried mother, although police had his phone, wallet, ID, and car. The only witness to this scene, Zac’s friend,, said in an interview that Zac was not speeding at all, and the police’s actions were unnecessary.

If we can’t trust the police, who can we trust? How many more times will futures be ripped away from innocent people and justice not served? The community is broken, sad, and angry over the loss of a great young person.

I am sorry for those who never had the pleasure of meeting Zac, and because now you never will. I can only tell you how many great things Zac could have accomplished before this reckless act took it all away.

"Zachary Champommier was shot by a plainclothes sheriff's deputy," MyDeathSpace.com