Dang, What A Cool House: The Laner Eichler 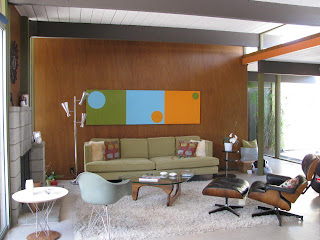 Brad Laner will tell you that he's not a rock star. Don't believe him. He is . And if you ask Nydia Laner what she does, she'll just say, "Oh, I'm in sales." Uh huh. I won't blow her cover, but trust me, she's not about to hand you an Avon catalog. The Laners may be modest about their career achievements, but they don't mind letting their fabulous Eichler house be a star. It's been featured in a number of location shoots, but most recently played the role of itself for the Los Angeles Times Home Section. The Laners, along with their kindergartner son Julian, are only the second occupants of the house; its original owner was a WWII vet who rejected a higher offer from an Asian couple because of their race, preferring instead to sell the house to the Jewish/Puerto Rican Laner family. "He was a selective racist," Brad explains. A self-described "architecture nerd," Brad is a supporter of the plan to make the Balbo
Post a Comment
Read more
More posts