"Two Of Our Children Have Been Shot..." 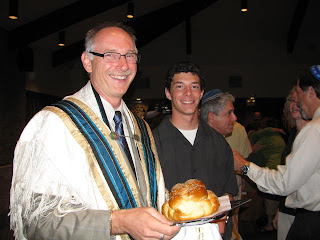 "We are a people defined by memory -- not to dwell in the past, but as a foundation for the future. We look back not to mourn, but to see how far we have come, and how far we need to go." Friday evening at Temple Ahavat Shalom, Rabbi Barry Lutz began Shabbat service with this meditation on the importance of memory as the congregation gathered on the eve of the tenth anniversary of the shootings at North Valley Jewish Community Center "to share the joys and comforts of coming together as a community." There will be larger commemorative events on Monday -- the actual anniversary of the event -- with city officials, press coverage, and TV cameras, but Friday night's Shabbat service in Northridge felt intimate -- more like a gathering of extended family than a civic event. In attendance were Mindy Finkelstein and Josh Stepakoff, two survivors of Buford Furrow's August 10, 1999 rampage. Furrow shot a total of six people that day, creating pain and outr
1 comment
Read more
More posts