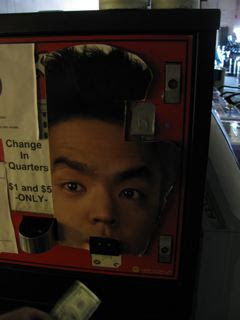 If you belong at Family Fun Arcade, you probably know it already. Less-than-hardcore gamers might enjoy the air hockey table or Dance Dance Revolution, but you won't find any vintage games here -- no Ms. Pac Man, no Galaga, no DigDug. Family Fun Arcade is all about fighting games -- Street Fighter, 3rd Strike, Marvel vs. Capcom. The family-owned arcade has been in its Granada Hills location for decades, and it's been described as the number one fighting game mecca in Southern California (they even had a Street Fighter IV before it was released in the U.S.). Family Fun also hosts tournaments that draw high-level players to its dark and soda-stained confines, and the convenient proximity to Asahi Sushi, Pizza Cookery, and Golden State Collective can't hurt either. Nathan, Family Fun employee: How long have you worked here? I've worked here for two years. How did you get the job? I used to work at the Simi Valley location, which they closed down, so I came ove
2 comments
Read more
More posts