Showing posts from November 5, 2009
Show all 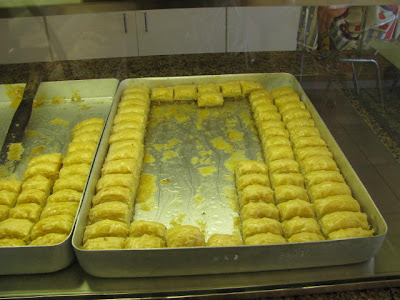 This tray was full until I got there. Granada Hills has a newly-opened pastry shop, and if you love baklava, get there ASAP. Royal Pastry, on Zelzah just south of Chatsworth, specializes in Turkish and Armenian pastries, and they make their baklava and boreg(both the cheese and spinach varieties) with a special variety of dough imported from Turkey. Everything else is baked fresh on the premises. "It's the butter," says Ani, the shop's head baker, when asked about what gave Royal Pastry's baklava an almost cheeselike richness and meltingly moist texture, without the tooth-punishing syrupy sweetness the dessert can sometimes possess. Both the cheese and spinach boreg had the same uncommon moistness as the shop's baklava, with tender centers almost reminiscent of freshly made noodles, but with flaky (not soggy!) pastry on top and underneath. The shop has all of the tarts, cakes, and cookies one would expect, and a few unexpected items, like imported Turkis
2 comments
Read more
More posts