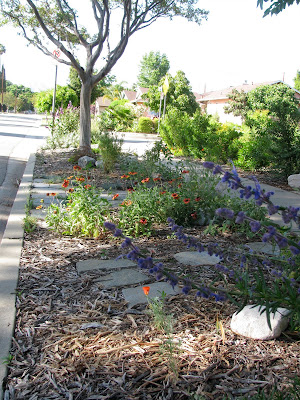 The DWP has been encouraging L.A. residents to replace thirsty lawns with drought-tolerant plants for several years now; the utility company even began offering rebates last year to further prod L.A. residents into reconsidering their landscaping. Homeowners are offered $1.00 for every square foot of grass in their yard or parkway (the strip of city-owned land between sidewalk and street) they replace with low-water-use plants. Granada Hills resident Kris Schmidt, however, wasn't eligible for a rebate. An early adopter, he had already torn out his lawn well before the program began—three springtimes ago—replacing it with low-water plants and California natives such as California Black Sage, Wooly Blue Curls, Hummingbird Sage, California Yarrow, Deer Grass, and California Poppies. For all of his trouble, Schmidt has enjoyed substantial water savings—and received a violation notice from the City of Los Angeles. Schmidt had recently done some tree trimming and had left those br
7 comments
Read more