Showing posts from September 9, 2009
Show all 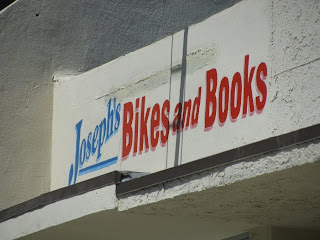 Open just two weeks, the brand new Joseph's Bikes and Books on Chatsworth (near Encino Ave.) offers an interesting combination of wares: Bicycles and Evangelical Christian literature. The bike selection is mostly second-tier -- not high end, but not Wal-Mart, either -- and the book selection is 99% for children and 100% Christian. Titles like Bedtime Bible Stores and Good Manners For Christian Children share the shelf with a glossy coffee table celebration of Mel Gibson's bloody Passion of the Christ. Also provided free for the taking was a plentiful selection of Jack Chick tracts, those irresistible mini-comics that explain how to achieve salvation through graphic black-and-white illustrations. Among the store's selection of Chick tracts was "Bewitched," which describes for readers the ways in which reruns of the popular Elizabeth Montgomery/Dick York/Dick Sargent sitcom lead young people to drug abuse, and "The Sissy" which follows a hunk
3 comments
Read more
More posts