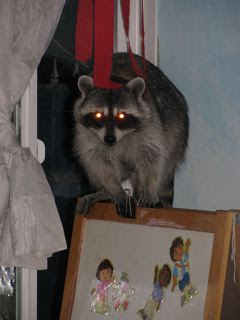 Last night at about 4:00 a.m., a raccoon attempted to stage a home invasion robbery in my house. I suspect that this is the same masked bandit that has been treating my backyard fishpond like his own personal sushi bar, so I had no sympathy for this bloodthirsty killer, especially when he perched himself on my three-year-old's magnetic easel and refused to budge, even after being spritzed with a squirt bottle and prodded with a broom. His only response was to stubbornly stay put, climbing up to the window ledge and, in a further show of defiance, shitting down our wall. My husband said he felt sorry for the beast, and saw it as nothing more than a poor frightened creature who wanted nothing more than to escape, but I'm not the softy my husband is. If you think those eerie glowing eyes are just a reflection from my flash, you are mistaken, my friend. They looked that way the entire time. Ranger Rick is an agent of evil -- why else would he make a beeline for the sleeping
1 comment
Read more
More posts