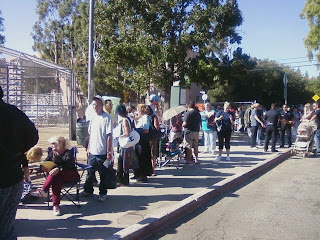 Pardon my French, but quel clusterfuck! The line for H1N1 vaccines, as of 10:30 a.m., stretched from the Recreation Center all the way out to Petit and all the way down to Germain. And not one person had yet received a vaccine, despite a posted opening time of 9:00 a.m. When I asked a police officer how long the wait was expected to be, he said "No idea. They're waiting for a paper that everyone has to sign. They haven't even started yet. But once they get started it should go fast." Oopsie, forgot those pesky consent forms. Well, it's not like the Health Department could be expected to know how to do this sort of thing.... UPDATE: by 1:00 p.m., the line had shrunk, stretching only as far as the outer edge of the parking lot, and officials were passing out yellow forms. The wait was reported to be approximately an hour and a half, but priority would be given to pregnant women or people who couldn't stand for long periods of time. Anyway, it&
Post a Comment
Read more

The Swine Flu Vaccine And Children

Just a reminder that today and tomorrow, H1N1 vaccines will be available at the Granada Hills Recreation Center from 9:00 a.m. to 5:00 p.m. For parents who are still on the fence about the risks and benefits of the vaccine, I recommend reading "Swine Flu And Children" from Babble.com . The most salient quote: "For parents who are still concerned about the potential risk of Guillain-Barre Syndrome, it may be helpful to consider that more children have already died since August 30th of this year from the swine flu than those who died from GBS during the vaccination period in 1976 (Approximately 500 people contracted GBS and twenty-five died)."
Post a Comment
Read more
More posts