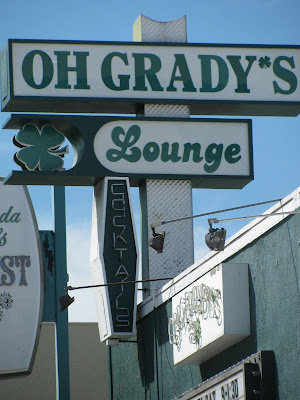 "Everybody in Granada Hills basically comes to our bar on St. Patrick's day," says Danny Deprest, who co-manages Oh Grady's in Old Town Granada Hills with his partner Melissa, who owns the bar.

Oh Grady's, like most Irish-themed bars, expects to have a full house on March 17th, but they're planning to keep things slightly lower-key this year than last.

At the height of Oh Grady's 2009 St. Patrick's Day party, Los Angeles Fire Marshalls paid a visit at about 11:30 p.m. and shut the place down for overcrowding and lack of a proper fire permit.

The lack of a permit was the result of a simple misunderstanding, Danny explains. "The entire time the bar was open -- from when it was Valentino's, and then became Oh Grady's -- nobody ever caught that it didn't have a fire permit. We took over almost two years ago, and you have to go to Building and Safety, and Alcholic Beverage Control, and no one caught that there was no fire permit. We thought…
1 comment
Read more
More posts