Showing posts from September 5, 2009
Show all 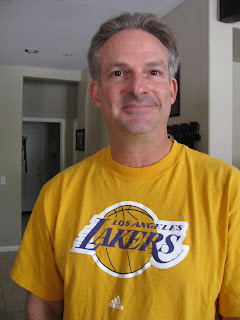 I'm a Buddhist. Can't help it really, since half my family is Asian and growing up, it was the only "religion" I had around. Anyhoo, you may or may not have noticed that there's a lot more churches in G.H. than Buddhist temples, so we Buddhists usually just go hang out at each other's houses. The nice thing about that is after we're done doing our Buddhist-y things, we can do stuff like swim in the pool or raid the refrigerator or pick fruit off each other's trees. That's good, because meditation always makes me hungry. Scanning Meetup.com , I found some more local Buddhists who were kind enough to host a gathering in their home. They also promised bagels and a potluck brunch afterwards, so I was sold. When I rang the doorbell, I was greeted by a man wearing a flowing, saffon-colored Lakers T-shirt named Bill. Here, the practice was Nichiren Buddhism , which, unlike Vipassana , involves chanting . Bill told me that he got involved in Bu
Post a Comment
Read more
More posts