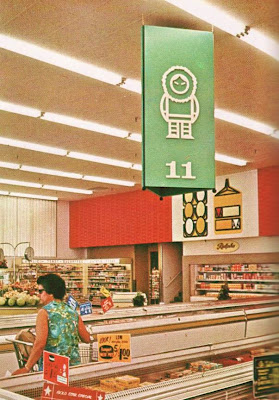 The always-fascinating historic blog Pleasant Family Shopping does it again. Check out the site for an amazing full color photo spread of Ralph's Supermarket on the corner of Balboa and Chatsworth in 1965. "Beyond the new layout itself, a big part of the remodeled Granada Hills store’s appeal was its striking new decor. The colorful, classy new look was the work of Brand-Worth and Associates, a Los Angeles-based firm that specialized in retail interior design. The new and remodeled Ralphs supermarkets of the 1960’s were among the most elegant of the era." The best part is the graphics on the aisle directory signs, which feature images instead of words. The politically incorrect yet still unmistakable Eskimo (drawn with so few lines!) indicates -- yes, it's obvious -- frozen foods. Also, dig the boxer sporting a pearl necklace about to elegantly dine on a dish of Alpo. read more
1 comment
Read more
More posts