Homeless Encampment Between Jack In The Box and Trader Joe's 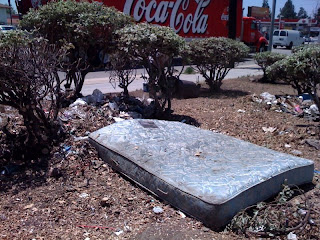 The following entry was written by guest blogger Lee Lavi Ramirez, chief instructor at the newly relocated Aikido center North Valley Aikikai , located on San Fernando Mission Boulevard, two doors down from the Tender Glow. I had no idea that homelessness was so close to home. I've lived in Granada Hills for almost seven years now, and drove almost daily through the busy shopping center on the Northeast corner of Balboa and San Fernando Mission Boulevards. Right near Jack in the Box, behind the Trader Joe's store there is an island, full of bushes. The bushes were full and quite tall, and used to be the home of some people. The first time I noticed this was when I opened my Aikido school, on San Fernando Mission, and started walking to my bank across the street. As I was passing by, I heard people talking, and then saw a few chairs in between the bushes, with people on them, talking and drinking. The next time, one early morning, I noticed the sleeping bags, and even a m
Post a Comment
Read more
More posts