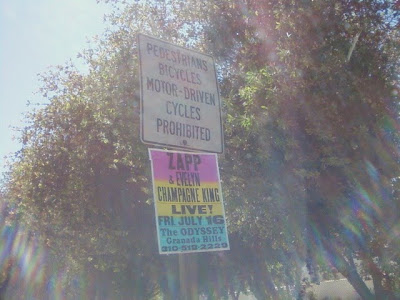 This Friday night, hilltop dining concern The Odyssey Restaurant will play host to a concert featuring more-than-one-hit wonders Evelyn "Champagne" King and Zapp. No expense was spared for the show's vigorous publicity campaign, in which promoters stapled rainbow-hued signs on every nearby freeway onramp and even mentioned the show on MySpace, which is a world wide web site on the Internet. With its magnificent vista and prosaic menu, The Odyssey is better known for bar mitzvahs than for funk, but GigaGranadaHills has high hopes this might be the start of a new trend. Today Zapp; perhaps tomorrow, the P-Funk All Stars reunion show! It could happen! Are you reading this, George ? Metallic jumpsuits match the metallic talkbox sound in this video of Zapp in their heyday, before frontman Roger Troutman and his brother Larry died in a murder-suicide. Brother Terry Troutman now fronts the band. Evelyn "Champagne" King is best known for "Love
Post a Comment
Read more
More posts