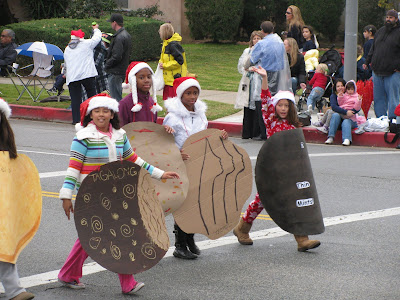 I've always wanted the GH Parade to have a little more Doo Dah and little less rah-rah, and this year, it edged ever so slightly in the right direction. The parade's theme, "Favorite Holiday Toys," brought some playful Festivus spirit to Chatsworth Street, including a huge pack of Legos, Rock 'Em, Sock 'Em Robots, and several much-needed vuvuzelas. Oh, and the Boy Scout troop that played the punk rock Xmas carols were certainly out to win my heart—I gave them bonus points for blasting a hardcore version of "The Twelve Days Of Christmas." Like I've always said about the Granada Hills Parade: it's long, it's boring, it's corny, and it's OURS. It's no Tournament of Roses, but every year, it still makes me glad I live here. And the award for sexiest knees goes to Steve Steinberg of GHNNC! Dude looks like a lady. Me and weatherman Tom Tcimpidis in the judges' booth. I asked him to do some
7 comments
Read more
More posts