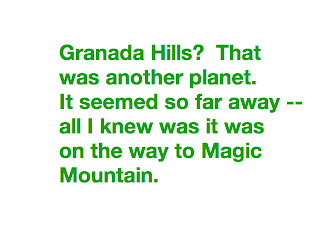 The following story is by Erik Himmelsbach , a Valley Village writer and television producer. His short story about Valley bar mitzvahs, “Fried Chicken,” appeared in the anthology Another City: Writing From Los Angeles (City Lights, 2001). He occasionally blogs at Valley Boy. Almost Paradise By Erik Himmelsbach I moved to the San Fernando Valley in 1973. Just 8 years old at the time, my life was about to spiral downward faster than Lindsey Lohan’s acting career. Prior to the move, I lived in a small Venice house with my mother and stepfather. Life was comfortable, predictable, and secure. In a blink, my stepdad lost his job, sold the house, and moved us over the hill, where I was tossed into a veritable 20 th century Hades -– a rough-hewn suburbia filled with tropical fish stores, camper shell lots, and lots of familial discord. We moved into a fortress-like apartment on Columbus Avenue in Sepulveda. It was a stucco labyrinth of one-, two- and three-bedroom cocoons in which
2 comments
Read more
More posts