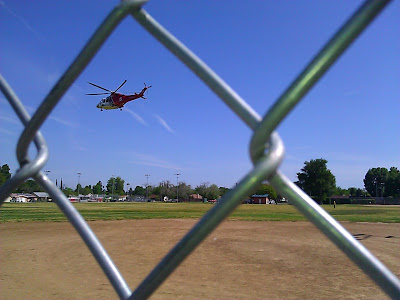 It's not every day you see a helicopter land in the middle of Petit Park — and that's a good thing. But it happened on Saturday. According to Erik Scott of the Los Angeles Fire Department, "at 2:32 PM the LAFD quickly responded to an address on Chatsworth near Debra for an ill infant. Firefighter Paramedics rapidly treated the child and called for helicopter to transport to Children's Hospital in serious condition." To protect the family's privacy, no further information was made public.
Post a Comment
Read more

Speculation And Guesswork On The Future of Granada Village

A press release about the development of the Granada Village Shopping Center says, “One of the unique elements will be the creation of an outdoor dining district at the front of the center with connected patios and trellised seating areas to create energy and to increase pedestrian activity.” If I were to speculate, this will probably means the addition of a new corporate chain restaurant or two in the center (Applebee's, anyone?). But what exactly does "Dining District" mean? Maria Fisk of the Old Granada Hills Resident's Group Zoning and Density Committee explained: "Nadal Construction reviewed plans for a 'dining district' and there are several options for the south end of the shopping center (near former Du-par’s): - One driveway will be closed -3-4 restaurants are planned (converted Blockbuster, Winchell’s, Du-par’s and possibly a new 4th building N of Du-par’s) -They would not comment on restaurants whatsoever “don’t want to start rumors” -Area
15 comments
Read more
More posts