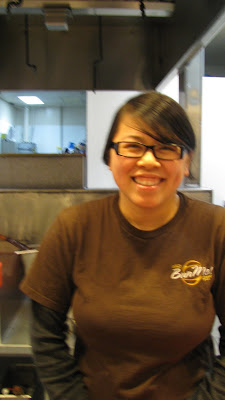 Sometimes, it's tough being a Granada Hillsian. Living out in the sticks as we do, there are so many things we have to travel for miles to get. Want to ride on a roller coaster? You have to go to Valencia to do that. Want some Ethiopian food? It's all the way down on Fairfax, which might as well be on the moon. Want to buy the fabric to sew yourself a frock? JoAnn's is all the way out in Porter Ranch. And if you want a Vietnamese Banh Mi Sandwich, you have to hitch up your horses and ride all the way out to the forbidden hinterlands of Northridge. It might have been worse, though. When he learned that his brother Keith planned to open a Banh Mi shop, Michael Bao Huynh, a very highly regarded chef who owns several Vietnamese restaurants in New York City, said he should put it on Melrose. But Keith, who lives over by White Oak and has kids at GHCHS, wanted something a lot closer to home. So he opened Bun Me on Reseda Boulevard. GH's sole Vietnamese joint, G
3 comments
Read more
More posts