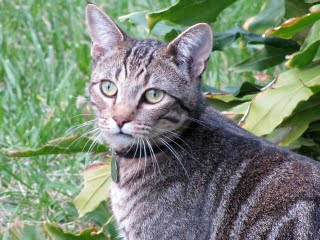 There are plenty of Granada Hills news items I could be blogging about today if I were a good and responsible citizen journalist. Granada Hills Charter made the finals in the Academic Decathalon and the team's going to the state championships. The Balboa Highlands Eichler tract is finally getting that Historic Preservation Overlay Zone designation that residents there have worked on so hard for so long. And you can read about those things if you click on the links. But all I can really think about right now is my lost cat, Killian.

He was always a wanderer—he'd tasted freedom as a stray kitten, before he'd wound up at the pound, and although he was still young when I adopted him, he'd already made up his mind that the life of an indoor cat wasn't for him. At least not during the daylight hours. But by nightfall, he'd be back in my house, sleeping at the foot of my bed every night.

The last time I saw him was on Tuesday morning, while I was interviewing the milkman. He came up and wove through my legs as Ron and I talked, and then wandered around the corner of the yard and out of sight. Rain came later that afternoon, and that night he didn't come home. It wasn't unusual for him to be out all day, but when twenty four hours had passed, I began to worry.

Today, I walked the neighborhood, dropping flyers with his photo on neighbor's doorsteps. Would it be useful? I felt a kinship with the tree trimmers and gardeners who leave their business cards on porches, hoping to find work. I knew the failure rate would be high, but I have so few options.

I named him Killian because "Faster Pussycat, Kill, Kill!" would have been a bit long, and really, this cat turned out not to be much of a killer anyway. Manhandled by my toddler daughter from a young age, Killian grew to be extraordinarily patient, understanding and calm—unflappable, really. All of my neighbors knew him, especially the ones who had cats, because Killian would visit their cats for playdates. I'd always thought most cats would be infuriated by another cat encroaching on their territory, but three separate neighbors told me that Killian was always a welcome guest—welcomed even by their cats, who seemed to enjoy his visits.

My husband's thinking car accident. It's not unlikely, but I prefer to imagine that my friendly-to-a-fault cat was kidnapped by someone who couldn't resist his charms. Killian would always let anyone scoop him up into their arms, friend or stranger. He'd even try to engage passing dogs in play, and be surprised if they barked or growled. He didn't know that anyone would want to do him harm.

That blithely trusting nature was perhaps inherited from me. I just put a lost cat ad up on Craigslist, complete with my phone number, and already, that trust has been abused.

Moments ago, I received a phone call. "Did you lose a cat in Granada Hills?"

"Omigosh, where do you live?" I ran to grab my car keys, but then I heard guffaws.

More guffaws. Teenage voices. Young men. Soulless cretins, enjoying a momentary feeling of anonymous power. Enjoy the rest of your miserable lives, motherfuckers, I thought, as I hung up on them. You are suffering because you unable to comprehend the love I have known, from humans or from cats.

I'm anticipating more abuse as a result of this blog post, but fuck it. If it raises the odds that I will see my wandering, unfaithful, rotten little ingrate of a cat again whom I brought home from the pound and love with all of my heart, then go ahead, heap me with more ugly, blackhearted prank calls and nasty emails. The love I have known has taught me that it is all worthwhile.