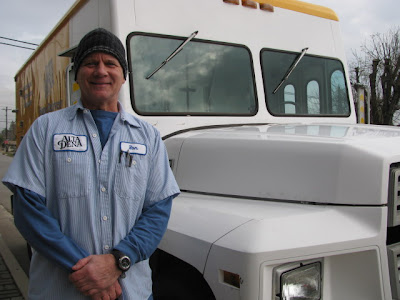 I have a milkman who comes to my house and delivers milk to my door. But when I tell people that, they always say, "They still have milkmen?"

They still do—at least Alta Dena does. The milkmen don't wear white uniforms or carry clinking glass bottles up the walkway in wire baskets, but they do bring milk—even organic—as well as eggs, bread, cheese, yogurt, orange juice, and ice cream to your doorstep.

I first started on home delivery service when my son was an infant and running out of milk was an all-hands-on-deck, running-to-the-store-in-your-jammies-with-a-screaming-baby emergency. Now, I'm hooked on the security of knowing that I'll never find myself in any sort of got milk commercial-style crises, thanks to my milkman Ron Cleven, who's been delivering milk to my family for the last six years. I convinced Ron to come back to my house at a decent hour so I could pepper him with questions about (one of) the world's oldest professions.

But the hours are kinda crazy, huh?

How many houses are on your route?

I got about a hundred and twenty right now.

So you're pretty busy.

Yeah—I've been doing this for twenty-five years. When Bill retired, that other guy you had, I took over his route. Most of my route is up above Rinaldi. 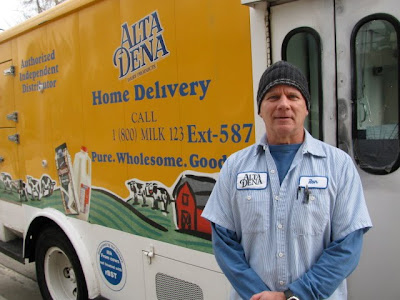 Is it mostly residences?

You go to bed at 5:00 p.m.? Is that hard with family life, or has your family learned to work around it?

Yeah. In fact I met my wife...she was one of my customers. Twenty-four years ago.

How did that happen? Was she up late at night, or early in the morning?

I don't remember how I went to her door—I think it was to collect her money. And we were both going through a divorce, so I just asked her out one time. And we started going out. She had three kids from a previous marriage, and I had a daughter. That's how that started.

Wow, that's neat! So, when people ask you what you do for a living, and you say that you're a milkman, most people don't know that there are still milkmen around, right?

I don't know—I think they think it's a thing of the past.

Well, I think we're the only dairy doing it.

So how many guys are there at Alta Dena who do your same job?

All over the Valley?

Yeah. Some guys' routes are far, like Camarillo, Santa Clarita, way over there.

Where do you go pick up your stuff from?

Chatsworth branch. In Chatsworth. From here it's about fifteen—well, for this truck, twenty minutes. It's slow. I don't go real fast in it.

And you were a Marine too?

Yeah. How'd you know? (Gestures to a USMC logo on his truck) Oh, the sticker.

So there's about twenty-five guys who are all over the Valley, but your beat is Granada Hills?

So you're the guy for this area. Do you get to meet many of your customers?

No, I don't see anybody! If I'm lucky I might see somebody up early or maybe they come to the door if they hear me. But it's not often. You're the first one I've seen in a long time!

So does it get lonely?

So you serve all these families for years, yet you never get to see them?

I just know them, I know who they are, but some of them I've never seen before.

Yeah, I only saw you that one time, it was a few years ago. So... what's good about being a milkman? What do you like about it?

Believe it or not, I like the hours. Because I'm home during the day. And when I get home I watch Young and Restless, at 11:30... you know that soap opera? And I can go to the beach or do whatever I want. Except the hard part's going to bed early, especially when the sun's still up, when the time changes. But I'm so used to it anyway. I've been doing it for twenty-five years now.

What were you doing before that?

Making doughnuts in a doughnut shop.

Actually, it's all night, almost the same as this one. My parents owned a doughnut shop in Chatsworth. It's still there, on Devonshire and Mason. They sold it about fifteen years ago.

So you were part of the family business. And you've lived in the Valley how long?

I grew up in Chatsworth. Started going to elementary school here in second grade.

And your family came from where before that?

This job in Des Moines, Iowa would be a lot colder at that time of night.

So you like the hours, that's what's good about it. What's hard about it?

The weather. Like when it's been raining lately. When it rains, I'm working out in the rain and I'm getting wet, even with my rain stuff on. Then I was out there when the earthquake hit too.

You were out on your route when the earthquake hit?

Yeah. In fact, I was walking down from a customer's house way up by Knollwood, and I remember the ground started shaking and cars were bouncing on their wheels. I knew we were having a bad earthquake. I got back in my truck and drove back to the dairy real careful, because where I was at, Balboa was flooded with water, and there was fires in those houses—I had to go around the block and under the freeway, and I remember all of the lights were out.

Did you get to see a lot of the damage on that drive back?

Yes. All the street lights were out. It was a holiday. It was about four o'clock. I remember that morning.

So what time do you usually arrive at my house?

Between 1:30 and 2:00. Used to be 4:00, when that other guy had the route. I had to change everything around, because I had to combine the route I already had with his.

So you're pretty full up right now?

Sort of—I can always use more customers! A lot of people have quit. Some people move, or the economy or something.

The economy is kinda rough right now. So why should people get their milk delivered?

That way they don't have to go the store and spend more money.

Don't they pay more to have you deliver it?

No. It's about ten cents more, but you know when you go to the store and you end up buying everything else, not just the milk. And the stuff I carry is the stuff you run out of the most. I've had a lot of people tell me that when they go to the store just to get milk or eggs or something, they end up buying potato chips and cookies and everything else. And then they save on the gas. That's the way I look at it.

I don't have a service charge. Some things are a nickel more, some are a dime more.

How does that work, that I pay almost the same with you to get it delivered to my door than I would at the store?

Well, I get it at distributor price, that's why. Like the stores do. I'm an independent distributor.

So you basically are the store. Instead of paying the overhead I would pay to Vons or Ralphs, I'm paying that to you.