November 05, 2012
In this first installment of the Great Granada Hills Pizza-Off, the hunt for Granada Hills' best delivered pizza will pit two chains against each other: the larger Ameci, with 34 locations, versus the far smaller Vincenzo's, which has just two locations, in Granada Hills and Simi Valley. 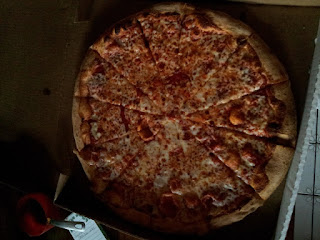 When they say large, they really mean large: that word gets you 28" pizza. Bigger isn't always better, but in this case it was: Vincenzo's pizza had a very fresh taste, with a pleasurably chewy, bubbled crust. 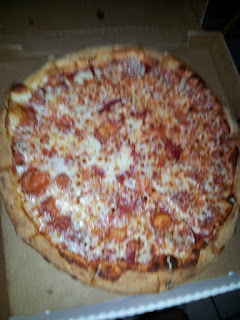 
Ameci's large pizza is a 14-inch eight-slicer. Consensus: it did the job of being a pizza. Beyond that, the crust was flat and without body or character, and also sadly soggy -- a huge no-no in pizza making. Were they trying to save on power bills by using a cooler oven?

No doubt about it: tasting these two pizzas side by side made the choice easy, for the discriminating adults as well as for our panel of less picky 12-year-old tasters, who devoured the Vincenzo's pizza first -- and not just because of the pepperoni -- while they left the Ameci pie on the counter. "I normally like plain cheese best," said one panelist, "but this pepperoni one is way better."

Stay tuned for the next matchup, where we pit current reigning champ Vincenzo's against another competitor!

The Granada Hills Pizza-Off is looking for sponsors, i.e., someone to buy me a pizza. Sponsors can NOT work for or be in any way affiliated with a pizza shop. Drop me an email.