Looking around Old Town Granada Hills last Friday night at 7:00, you'd swear this town had a vibrant nightlife. Chatsworth's sidewalks were buzzing with activity, from Zelzah to a few blocks eastward. Kids rolling down the street on heelies dodged adults standing in clusters, eating tacos and sliders, chatting, texting, arranging rendezvous with friends. Pedestrians crisscrossed the street, ducking into storefront businesses -- Menchie's, Blis Hookah Lounge, Sweet Design and others -- as well as sampling the wares from scattered food trucks parked on either side of the street.

"One or two trucks is okay, but eight -- that's ridiculous," said an employee of Numero Uno Pizza who refused to give his name. "It's not fair."

Friday night, usually a busy night for the pizzeria, the employee said, saw a drop off in business and numerous complaints from takeout and dine in customers who couldn't find the easy parking they're accustomed to finding in front of the store. Instead, the space in front of Numero Uno was occupied by the Bollywood Truck, and a short distance away, a truck run by Maria's Italian Kitchen.

Numerous sources named Numero Uno as the source of the phone call to LAPD that ended the party, but this employee denied making the call. "We didn't call the police, but I'm glad someone did," he said. "They leave trash, we know they're breaking laws," he said of the food trucks.

"An Italian food truck, parked in front of an Italian restaurant. Ridiculous. They had a Chinese truck in front of Vegetable Delight too. How would they like it if we got a cupcake truck and parked it in front of their store?" the employee said, pointing in the direction of Sweet Design Cupcake Shop.

Joeleen Medina, the Cupcake Shop's owner, co-organized the gathering of trucks with Rob Grier of food truck The Munchie Machine, but Medina says she was no happier about the placement of trucks than Numero Uno was.

But Medina did not agree that the trucks steal business from local stores, or that they were breaking any laws. 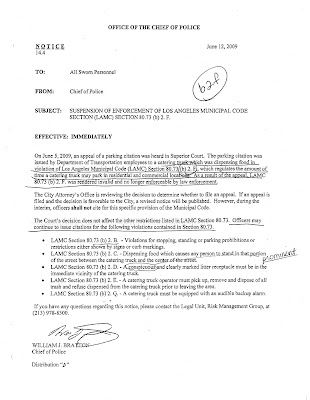 "Food trucks are an absolute community event, they bring people out. They don't take business away, they bring out their own followers. The community wants them here." Medina also added that food truck nights bring attention to local businesses.

Medina explained that as word of the event leaked out, more trucks than had been anticipated or specifically invited piggybacked on to the event. She also said that trucks had been instructed to park in front of her shop, across the street near Blis Hookah Lounge, or on Yarmouth Street, but trucks that parked in front of Numero Uno and nearby Vegetable Delight failed to comply with those instructions and the Bollywood truck refused requests from three different truck owners to move their truck from the spot directly in front of Numero Uno, but the Bollywood Truck owners, who could not be reached for comment, stayed put.

Julia Muccia of Papas Tapas said that at first, LAPD officers were apologetic. "He said, 'Sorry, we don't want to do this, but somebody complained.'" The officer asked Muccia for her paperwork, which she keeps in a binder on the truck -- including a business license, permit from the health department, and insurance paperwork. But the officer asked for a street vending or "peddlers permit," which Muccia didn't have, nor are food trucks required to have, Muccia said. "I know my business, and I don't need a peddler's permit. I have all of the licenses I'm required to have."

Not certain of the permit requirements, the officer called his chief, Muccia said, who arrived on the scene soon after. "The chief comes out, and the sidewalk is filled with people, and he says, "If you don't close your doors, I'm going to handcuff you and impound your truck."

Under threat of arrest, and amid protests of the assembled crowd, Muccia shut down for the night, as did the other trucks. Muccia, who contacted her attorney that night, said her lawyer assured her that her permits were in order and the LAPD officers were in the wrong, and uninformed about truck permit requirements.

Said a frustrated local resident who was present at the event, "That's what cops do. They don't know the law, so they threaten you with force."

The Numero Uno employee GigaGranadaHills spoke to presented a card given to him by LAPD officers, which had written, "LAMC 80.73(b)(2)(f)." (The card also had the name and number of Senior Lead Officer Dario Del Core, who didn't return calls asking for comment). This was the municipal code section officers said that food trucks were in violation of, according to the employee. "The law says that the trucks can only park here for half an hour, and they're breaking that law." This code violation was presumably the reason that truck owners were threatened with arrest.

However, that City code section, which states that catering trucks can be in residential areas for half an hour and commercial areas for one hour, is the subject of an LAPD memo that apparently, the officers on the scene Friday night didn't get. Provided to GigaGranadaHills by Matthew Geller, CEO of the SoCal Mobile Food Vendors' Association, the memo, from Chief William Bratton, says that 80.73(b)(2)(f) is "invalid and no longer enforceable" due to conflicts with state law. "In California," Geller explained, "there has to be a rational relationship to public safety... (but) time limits don't improve public safety."

"We have an ill-informed police department going out and enforcing something that the cout has said they couldn't enforce," Geller said, arguing that police are overstepping their bounds, even if they do so in the name of protecting restaurant owners. Just as it it wasn't the role of police to protect reord stores from iTunes or bookstores from Amazon, Geller argues, it's also overreaching for police to act in the interest of protecting brick and mortar restaurants.

Still, food truck owners consider themselves an enhancement to the communities they visit, and based on the foot traffic on Chatsworth Street that night, they can make a strong case. Mike Borassi, of Maria's Italian Kitchen, one of the trucks that raised Numero Uno's ire, says that the philosophy should be the more, the merrier. "We're very respectful of restaurants, because we own nine restaurants, and we wouldn't want trucks parked in front of us. Borassi said he agrees with Numero Uno's position that his truck shouldn't park in front of their restaurant, "and we didn't. We pulled out and circled and found a space up the street. We were parked in front of a place that was closed, with newspaper on the windows."

For the most part, truck owners present at Friday's ill-fated event were in agreement: parking directly in front of the restaurants, though technically legal, is discourteous and a bad idea. “I think trucks are asking for trouble when they park in front of restaurants,” Bill Kelley of Smokin' Willie's BBQ said, expressing a sentiment echoed by every truck owner GigaGranadaHills spoke to.

When asked for his opinion on the best way to prevent future conflicts between food trucks and restaurants, Mike Borassi said, in his thick Bronx accent, "There has to be respect. You don't want to park directly in front. It's gotta be the type of thing where everybody's gotta be respectful, and try and work together. We're all out there trying to do the same thing -- generate some business and feed people. I mean, it's like, c'mon. The bottom line is, we're only serving food. We're not curing cancer. We want to make everybody happy."
granada hills food trucks granada hills restaurants