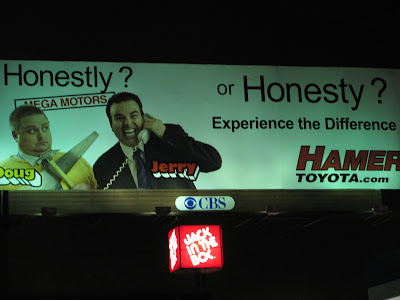 Here's what's funny about this billboard, seen at the corner of Balboa and San Fernando Mission Boulevards: no one gets what it's supposed to mean.

My take on it is that Doug and Jerry are supposed to be two assholes that lie, prompting you to respond with incredulity: "Honestly?" Whereas Hamer Toyota, by contrast, doesn't employ any assholes -- at least, maybe they don't. The question mark after "Honesty" leaves room for doubt.

And what of the presumably fictitious "Mega Motors"? By erecting this imaginary straw man, does Hamer seek to convince us that they are a puny, modest, mom-and-pop operation? One that happens to make use of military-grade searchlights on a semi-regular basis?

Okay, so "Mega Motors" has these two characters on one side of the billboard, but the only alternative Hamer offers is a faceless logo. Who knows? Maybe the guys who work at Hamer are even worse! They could look like Mephisto, or like Courtney Love. Maybe even the prophet Mohammed works there. Sure, he's honest, but we just can't show you his face. There's nothing there to contrast, because all of the attention is on Doug and Jerry.

Of course, Doug and Jerry themselves raise a host of questions. Here's what we do know about them: they have bad taste in typefaces. Hair-helmeted Jerry seems to be rude on the phone, and he also intimidates his hapless, blubbery co-worker Doug.

To defend himself against Jerry's poor landline etiquette, Doug has been forced to run out to the one of the service area bays and grab some of the carpentry tools that Hamer's mechanics normally keep on hand.

I can see how the claw hammer might offer some protection, but the reasoning behind the saw is less obvious. My first guess was that the saw could be used to sever Jerry's corded phone; the second, more grisly interpretation is that Doug will use the saw to dismember Jerry's corpse after flattening his skull with the hammer. This is clearly a move that Doug has been considering for some time, and today he has finally mustered the courage to do it. Depicted here is the moment when, sneaking up on the still-unsuspecting Jerry, Doug is only inches away from the deed. Doug only hopes that he can strike the first blow with his hammer before Jerry attacks with his 80's-era phone. Those things were heavy, and the curly cord could be used for strangulation; doughy Doug knows that if he doesn't move quickly, he could have quite a fight on his hands.

Hamer has presented this unfolding psychodrama for our consideration, presumably to convince us that their salesmen, unlike those of the competition, are not murderous and deranged sociopaths. But perhaps the truer reason behind this billboard is to distract us from Hamer Toyota's dreadful reputation. Yelp's opinion is overwhelmingly negative: of 20 reviews, only four were positive, and Hamer is given two out of five stars:

"These guys are as pushy and sleazy as they get.... And Hamer even kept calling us for two weeks to get us to come back in.... Don't give them your phone number!"

"The worst dealer ever! ...The car was still under factory warranty plus I got the extended 5 year from them. Go in to the service department and the guy tells me they will not fix it, that it's my fault for not taking cAre of it. ...I tell him about the tsb on the problem and to look it up, he tells me that he never hear of such a thing."

"WORSE SERVICE EVER IN THE HISTORY OF SERVICING CARS. "

"THIS PLACE IS A NIGHTMARE. To quote from 'Terms of Endearment'
Aurora Greenway: Would you like to come in?
Garrett Breedlove: I'd rather stick needles in my eyes."

"I'm with Steve on this place, it sucks all sorts of balls. "

"If I could, I would give this place negative stars."

"If you want to be lied to, get a car that is probably messed up on top of the already existing safety issues Toyota has, and deal with people who wont care about you as soon as you fill their customer service survey, then go to Hamer. "

Wait a minute... did you say "Doug?" Get this: Doug is a real person, and he doesn't work at "Mega Motors." He works at HAMER TOYOTA!

Not one, but two Yelp-ers single out a salesman named Doug, and one calls him "by far, the worst person I have ever dealt with in a customer service job.... rude, sarcastic, and abrupt."

Wow. Rude, sarcastic, and abrupt? Consider yourself lucky. At least he didn't go after you with a hammer and a saw.
Granada Hills blog