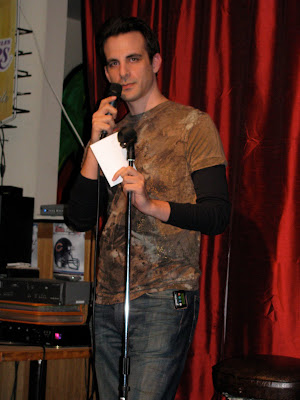 If you've been saying to yourself, "I should really check that out sometime," now's the time. The L.A. Pizza Comedy Night -- er, excuse me, Comedy Experience -- is celebrating its second anniversary tomorrow night, and lining up the most primo talent in their roster for the occasion.

Brian Monarch (pictured at left), host of Granada Hills' only comedy show, talked with GigaGranadaHills about the history of the Experience.


How did the L.A. Pizza comedy night get started?

I'm friends with the owners at L.A. Pizza and I actually just presented the idea to them a couple years ago and they loved it! A few weeks later in May of '08 we had our first show! We've done it every Tuesday night at 8pm since! However, this week's special two-year anniversary show is on Friday, May 14th.


How has the show changed over the course of the two years?

It's changed a lot! It started out with us performing on the floor without a stool, stage, curtains, or DJ. Recently a fellow comic and friend, Risky Betts, my favorite cowboy comedian (pictured at right), installed a stage for the show. So now we've gone from performing on the floor in front of video games to having an awesome stage complete with brick behind it! You should come down and check it out... It's quite comedy club-esque! 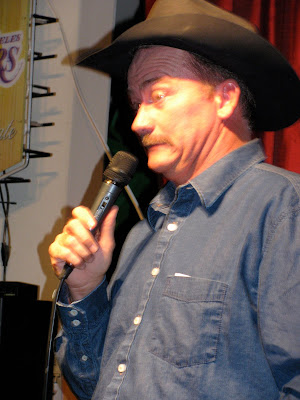 What is your most memorable moment from the last two years?

Well, there's been a few... But I'd have to say that Atom's (yes, this is how he spells his name) weekly visit is always very memorable. Atom is a young man with special needs that likes to drop by and get on the stage and talk for a minute or two every week. You can see him somewhere on the streets of Granada Hills any day of the week. However, he loves to come in on Tuesdays and do his comedy time, talking about his week and flirting with the girls in the restaurant.


What's the most difficult thing about doing the show?

The most difficult part of the show is probably coming up with a new crank call each week. One of the stipulations of having this show was that I have to call Domino's Pizza before every show as a form of punishment for them stealing lapizza.com. Yes, they own lapizza.com... Fortunately, the guys at L.A. Pizza do now have lapizzaco.com, which is a great site... But they still won't let me start a show without the weekly crank, on principal and principal alone.


How were the acts for Friday’s special show chosen?

There are only five comics on this show, as opposed to 10 that we usually have on Tuesday's. These five guys are all headliners and have been some of the past favorites at L.A. Pizza. Actually, two of the five have never graced the L.A. Pizza stage before. This will be their first appearance. Ari Shaffir is one of them! He's one of my personal favorites. He has toured all over the country and has been part of Joe Rogan's awesome shows many times. Also we have Joey "Coco" Diaz coming in for the first time. He's not on the flyer because he was just added. You've seen him in such movies as The Longest Yard and Spider Man 2! We also have Eljaye (He's a very popular comic from Chicago that performs all over L.A. and has been a favorite at every venue he hits... Mike Muratore is on the line up... He's the "Serial Killer of Comedy" and has done every club in the city. He's great with the crowd and has always been a favorite at L.A. Pizza. Last but not least, we have the headliner of the evening... The Greg Wilson! He's performed at Madison Square Garden, has been on VH1, Showtime, NBC, and every club around! He will close out the show in only a way he can!


Has the show launched any careers?

I can't say it's launched any careers, but I've been told by multiple headliners of the show in the past (Including Ed Greer and Danielle Stewart,) that the L.A. Pizza Comedy Experience has helped them in ways that no other show has. Every comic that has given me feedback has told me they love the room, and they love to get up on stage here. The crowd is supportive and it's become a favorite spot for comics and viewers alike on Tuesday nights. You can't beat a free show with awesome comedians and great pizza. This Friday should be one of the best shows we've ever had there -- we're really looking forward to it!