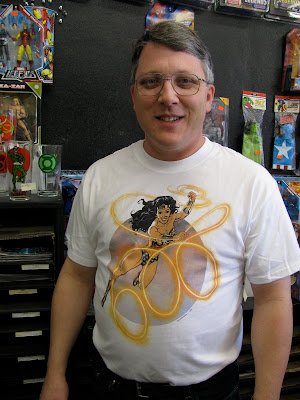 If you live 'round these parts and you've got a kid who's hooked on comics, Paul Sager is probably to blame. That's because Paul, who's worked at Continental Comics on Devonshire Street for 21 of the shop's 32 years, says the best part of his job is turning kids on to the joy of comic books.

"As I've gotten older -- and god help me it has been over 21 years -- I think what I enjoy the most is the four- and five-year-olds to the twelve-year-olds. When you see them first break into a comic -- and you only get one chance at this, the first time -- their eyes, I swear to god it's like a cartoon. Their eyes widen up like they're gonna pop out of their head, like a Bugs Bunny cartoon. It' s brand new, like an amusement park. There's only one first time."

If Paul seems like that goofy, kid-at-heart uncle you love to hang out with at Thanksgiving, it's because he is one, with plans to turn his nieces and nephews on to comics at the earliest opportunity. "My brother's got three kids, the oldest is two, and I can't wait."

Paul, who grew up in Santa Clarita, first walked in the door at Continental Comics in 1982, at the age of fourteen. Back then the store, which was only four years old and still in the hands of original owners Jim Winters and Mike Koppel, was something of a rarity. 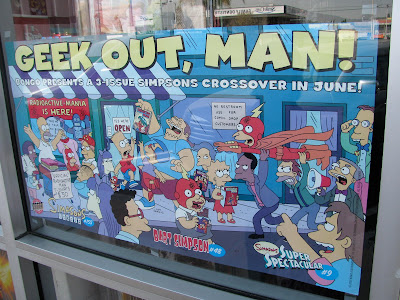 "There were no comic stores in Santa Clarita at the time -- back in '82 there was nothing out there. My whole childhood I was going from 7-Eleven to liquor stores to small mom and pop grocery stores, to wherever I could find them. Then my buddy took me here and I saw the place, and it was like a color explosion -- like it was the first time I saw comics. I just couldn't believe there was that many comics in one place!"

Paul immediately became a regular, catching weekly rides with his friend until he was old enough to drive himself ("when I got my driver's license, the first thing I wanted to do was come here"), and continued coming every week until he went into the Air Force. Four years later ("I had enough after four years, thank you very much"), the month he got out of the service, he took over as Continental Comics' manager. In 1998, he and a partner bought the store. 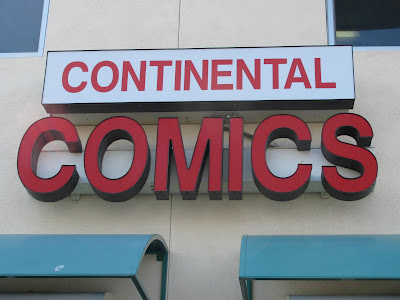 Of his inventory, Paul says, "I'm very happy to get anything anybody wants," but lately, he's been focusing more on comics for kids -- who can be an unpredictable clientele. "In a guessing game with over 10,000 titles, it's real hard to pinpoint what people want."

That's especially true of girls, Paul says. "I've had really young girls come in starting off with Archie, and then they went Gothic and went with Johnny the Homicidal Maniac, so it's real hard to figure out what they're going to want three to five years later. Girls change on the flip of a coin. "

Boys, on the other hand, "can be loyal to a tee," Paul says. "I've got a guy, surprisingly enough, he's been with me since he was in 2nd grade. And one comic I keep pulling for him all year long is Sonic the Hedgehog. He just this month graduated college, and the one book he wants to get, month in and month out, is Sonic the Hedgehog. Now, you can't beat loyalty like that. His character was Sonic, and he'll probably be getting married and passing them on to his kids."

Ever get comparisons to that archetypal comic shop clerk, Comic Book Guy?

Paul immediately launches into a pitch-perfect impersonation: "Best. Comic Book Store. Ever." So I take that for a yes.

"There are times when he's right, and times when he's very, very wrong," Paul says of the Simpsons character. "If he's somebody I have to be compared to, I can at least play off it (again in Comic Book Guy voice): 'Sir, do not lean on the counter. It is for looking, not for leaning. This is not a bar. If you want to buy a beer, go two stores down,'" he says, wagging a thumb in the direction of neighboring Lee's 4 Cocktails. 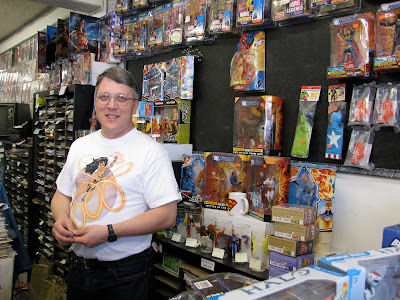 Also like Comic Book Guy, Paul is -- you listening, ladies? -- single. "Almost married once. I've loved and lost, and it's better to have loved and lost than not loved at all. But then, I'm not dead yet -- I'm still young and vibrant, and truth, justice and the American way."

In the near future, big changes may be afoot for little comics shop that that's served so many regulars for so many years. "In October our lease is up, and we might be staying here, or we might be moving after 32 years. We might get a bigger spot too. But I intend not to move more than at most a two-mile radius. I've worked too hard not to stay in this area. I would not like to leave this space after all this time, but with cheaper rent in other places, a thousand dollars a month goes a long way, and I've got a bunch of places I can go, because with the economy, there's empty spots all over the place."

Paul might consider leaving the location he's called home for more than two decades, but he has no plans to leave the comic book business, ever. "I love the medium, I love heroes, that there's something bigger and better than you are, something for you to aspire to. It's not like we're ever going to be Captain America or Superman, but it sure is good to have dreams about it, to have an adventure each month that's something new. I get a kick out of that."