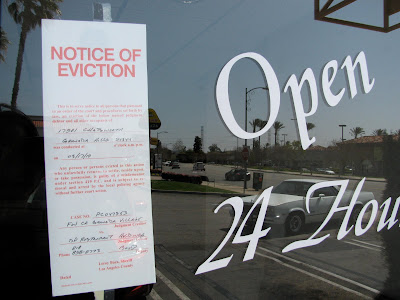 In a rather dramatic development for diners who were still mid-meal, the Granada Hills' Du-par's was closed last week by sheriffs, who carried out an eviction during business hours, escorting patrons out of the restaurant, sources said.

It seems this isn't the first round of trouble for the Du-par's chain in recent years. The Thousand Oaks Du-par's was closed last year after losing its lease, and during its last years the location had been plagued with health department violations.