How is it possible that I never before noticed the phenomenon of the Cream Puff Turkey?

Looking something like a cream puff swan put through a mutagenic process of unchecked cell division, there's not one, but two shops in Granada Hills that are proudly displaying these creatures: Ara's Pastry in the Old Town section of Chatsworth Street, and Vrej Pastry in the Trader Joe's center.

I learned from speaking to the lovely lady manning the counter at Vrej that in parts of town with large Armenian populations, like Burbank and Glendale, the Cream Puff Turkey is a standard offering at Armenian/European bakeries -- a time-honored Armenian-American tradition, it seems. The bakeries even compete with one another for supremacy in the field of Cream Puff Turkey artistry. It's something like a war over there -- and in a Cream Puff Turkey war, everybody wins.

The competition is so stiff that at first, Vrej didn't want to let me photograph their turkey -- I think they may have feared that I might be a spy from a competing bakery. After all, these turkeys are big business; Vrej has already sold 400-500 this year.

I also learned that cream puffs aren't just used to make turkeys; during the rest of the year, they make cream puff Christmas trees, cream puff baskets, and all sorts of cream-puff containing structures. I wonder if they could make me a Cream Puff Sta-Puft Marshmallow Man? 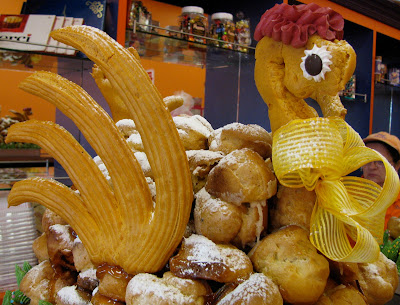 Eyes: Big and googly. Like it knows what you're thinking about doing to it. 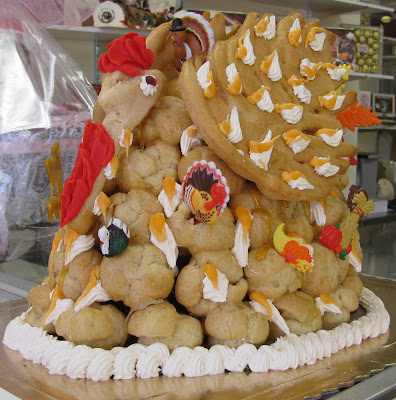