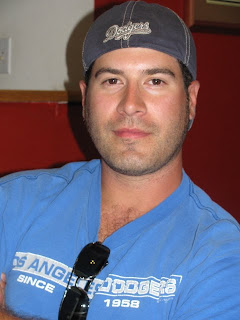 "For me -- especially with kids who are eight, nine, ten -- I feel like it's about learning the game, and learning how to play the right way, as opposed to winning. But not everybody feels the same way."

As an assistant coach for Granada Hills Little League, John wasn't calling the shots, so he just watched as his kids stampeded another team of younger players.

"If I were in charge, I probably would have stopped running around the bases as much, stealing bases against the other team. I would have put some of my less talented and less experienced players from the infield on the bases or let somebody else pitch, to not only give the other team a chance to get back in the game, but to allow the kids that are on my team to learn different positions and get new opportunities."

Come springtime, Little League will get more competitive, but for now, John feels that it's just about developing skills and enjoying the game.

"Right now we're just the green team. That's what Fall is -- there's no team names per se. In the spring they'll have a legit name, and then at the end of the season the team that wins the championship within the division goes into the tournament of champions, and they play the best teams from all of the surrounding Little Leagues, so that's where it starts to get serious -- there's a division champion, a district champion, a state champion. Then there's the majors, and that's where you see the Little League World Series.

"But Fall is the he secondary season. A lot of kids go off to play other sports -- football, soccer -- but some kids want to stick with baseball. In Fall, there's no tournaments, no championship, or anything like that. So winning doesn't mean anything. It's nice to win, I think the kids like to win, but I think that if the kids are not learning baseball, and instead are learning to take advantage of the other kids who are not as skilled, I don't see how that benefits either side."