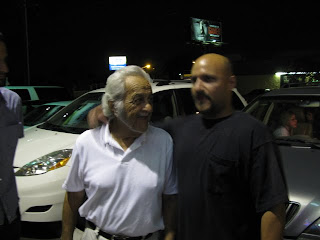 Seconds into our conversation, Vic launches into a stream of jokes.

"Why do Jewish men die before their wives? Because they want to.

"My wife was a centerfold, but the book was Field and Stream.

"Why do the Jews and the Italians get along? We steal it, they sell it.

"This one's a little off-color: A guy walks into the Walgreens, up to the girl at the counter. He's like, I'm feeling kind of embarrassed. I need prophylactics, but I don't know what size I take. She goes, 'Take it out.' She gives it two strokes. She goes, 'Aisle four, size medium.' Guy goes down the aisle, next guy's like, 'Could you do that to me too?' She says, 'Yeah, take it out.... aisle eight, large.' This little eight year old kid comes up and says, could you do that to me too?' She goes, 'Yeah yeah, take it out.' She goes, 'Register one, clean up.'" 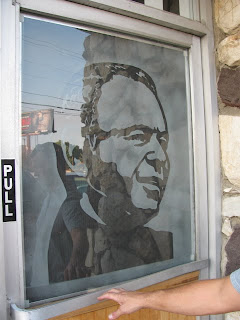 Okay, so it's not a family-friendly joke, but the kids weren't around when he told it -- they were busy being shoved into the car as my friend yelled at her son for his bout of misbehavior in the restaurant.

Casa De Pizza's quick-thinking waitstaff had done everything they could to mitigate the situation -- rushing out with mini antipasto plates, crayons, and coloring book pages, their efforts nothing short of heroic. But when a four-year-old insists on behaving in a manner that is very, very four, and his mother has thrown up her hands in surrender, there's only so much a server can do. 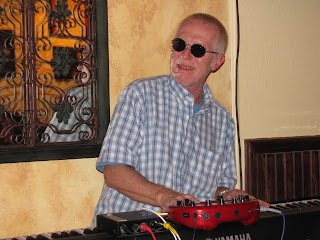 Fortunately, the rest of our party, which included three other kids (who remained seated throughout the entire meal, thank you very much) completely dug Casa De Pizza's Thursday night vibe with house band The Sounds of Sinatra, who have been playing this gig for thirty years, in various incarnations, but always with Vic as lead singer. Vic makes (less raunchy) wisecracks throughout the all-Sinatra set, and the band's arrangements aren't merely copycat covers of Ole' Blue Eyes' standards, but their own original, and skillful, arrangements. This particular lineup has been at it for fifteen years, so they've had time to practice. 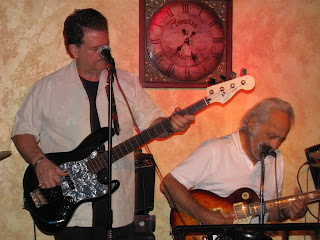 his venerable pizza joint is historic not simply because of its age -- although by G.H. standards 48 years is impressive -- but also because Frank himself once visited here, back in the 1970s. Yes, Francis Albert Sinatra once set foot in Granada Hills. Take that, Kruschev fans!

The legend goes that Frank was so impressed by the collection of Sinatra memorabilia on display here, he gave his permission for the restaurant's owners to dub Casa De Pizza's dining room "The Sinatra Room." 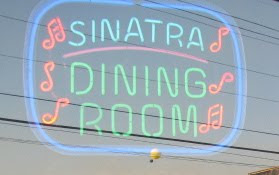 Don't think for a minute that Casa De Pizza's temple of Sinatra kitsch is mere hollow gimmickry. This place doesn't only show reverence for Sinatra, but also for pizza. The family-owned restaurant has specialty pizzas named for original owners Mike and Phyllis, as well as an extra thick crust pizza called the Tom Brown, with marinated tomatoes, and sausage, and the Mary Galati, a pesto pizza. But the pie who loved me was the Pizza Rustica, a thin crust veggie that won my heart with its garlic, Mediterranean olives, and capers. Ohh, you capers! Do we have a new winner for Best Pizza In Granada Hills? We very well might, because this one would be tough to top. 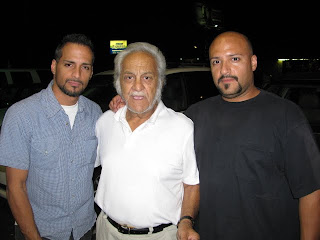 Out in the parking lot, I also met Jeff and Bobby (flanking Vic in the picture at left), Casa De Pizza regulars and long-time family friends. After Vic's round of punchlines, Bobby smiles and says, "With him you can always guarantee jokes like that," in a way that made me feel jealous that Vic was more likely to show up at Bobby's Thanksgiving dinner than mine.

"So you're regulars here?" I asked Bobby, who answered as plainly and matter-of-factly as if I had just asked an Amish family if they went to church: "Every Thursday, this is what we do."