What To Do About Billboards, Continued

Is this vandalism, or political commentary?


While I generally agree with the sentiment behind GHSNC's "Banning Billboards Resolution," passed over a year ago, I think the wording is a bit softball and the focus is misplaced. Here's the text of the resolution:

Banning Billboards Resolution
Whereas billboards in the Granada Hills South Neighborhood Council area have become a site of continual graffiti and vandalism;

Whereas billboard operators and owners in the GHSNC area have not fulfilled their stewardship in maintaining aesthetically pleasing billboard signs, allowing their property to wallow in the stains of graffiti thus forcing our stakeholders to be over-exposed to continual vandalism and encouraging blight in our community;

We, the Granada Hills South Neighborhood Council strongly request the Los Angeles City Council and the city of Los Angeles to pass legislation which bans and removes, at the owners’ expense, all billboards in our boundaries within 90 days of the passing of this resolution.

Here's where I differ with the above resolution: it defines grafitti as the problem and billboard removal as the solution.

Since I'm convinced that billboard removal is never, ever going to happen, ever, I have a different and somewhat radical perspective: I believe that billboards are the problem and grafitti is the solution. Or at least one of the most reasonable possible responses, when all other responses have failed.

Look at these pictures of perfectly un-graffitied billboards along Chatsworth Street and tell me they're not eyesores all by themselves:

Defacing billboards is a logical response on the part of people for whom all legal avenues of protest have failed. It is the logical response of people who desperately want the power to make choices about the appearance of the cities they live in, but have been denied that power by million-dollar megacorporations that are not in any way a part of their communities. How anguishing, to feel that as a resident of a city, you have no say in the way your own home town looks, because you are not a multi-millionaire. 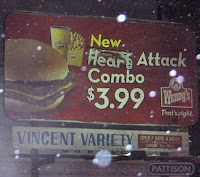 Yet with a can of spraypaint, or a large-format printer, and some study of The Art and Science of Billboard Improvement, ordinary citizens finally have a voice.

I ask you: why should companies like Clear Channel be the only ones permitted to express themselves in public space?

Grafitti is not the problem; billboards are. 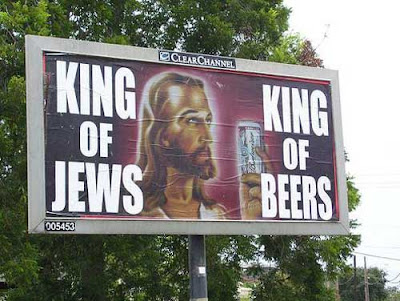