The Ghost of Buford Furrow 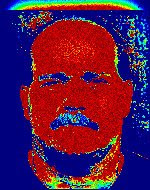 This weekend, The Los Angeles Times ran not one, but two mentions of Buford Furrow, the racist Aryan Nazi nutjob who shot up Granada Hills' North Valley Jewish Community Center in August of 1999.

Both stories seem a testament to the failure of Furrow's hate-filled ideology and actions and the failure of white supremacist thought to make any lasting or meaningful impact on American culture.

Sunday's Steve Lopez column about one of the young victims: Courage Sustains A Hate Crime Survivor

*This post was edited in response to this August 2, 2009 story, "The Free Ride That's Killing The News Business"
Granada Hills blog