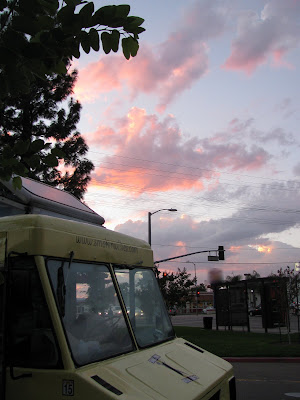 "Are you a spicy woman?"

I am, but sometimes, a girl's just not in the mood for sausage. So Bill swaps out the hot link on my combo for the BBQ meatball sandwich, flanked by a spicy chicken taco, a pulled pork taco, and a little cup of baked beans, which Bill Kelley, a/k/a Smokin' Willie, has strongly advised me to try. "It's my mom's recipe for barbeque baked beans, and so is the classic barbeque sauce," he says. "It's the recipe she's been making since 1969." When I take a bite of the pulled pork, I'm instantly envious; my mom never made anything that tasted like this. 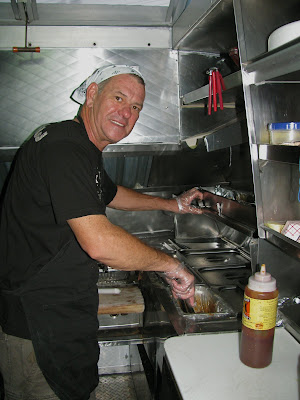 Kelley, owner of Smokin' Willie's BBQ Truck, used to work for Warner Brothers Records for 26 years until AOL bought Time Warner and he lost his job "the American way," to outsourcing. After a stint in another doomed gig — the mortgage business, Kelley says, "I saw this crisis coming and said I was never going to work for a big corporation again. So I started to retail my sauce."

Kelley wrote a cookbook, Smokin' Willie's Guide To Great Grilling, and began teaching cooking classes. "During demos, people said 'You should be selling your food.' Last year I visited the Kogi truck, and I said, 'You know, I could do my barbeque this way...' and here I am!"

A Northridge local, Kelley says that music and cooking are his life's passions — and when I visit inside the truck, there's a little boom box playing Prince for Smokin' Willie to bounce around the truck's kitchen to. " I have a beautiful family, a great job, I love what I do. I'm blessed to have a beautiful family that backs and supports me, and working with my son is awesome. My wife is a vocational rehab taco. Er, I mean counselor!" Kelley laughs and says, "I can't work and talk at the same time!"

The truck is truly a family affair: the recipes were first developed by Bill Kelley's mom, and his
son, Nick, takes orders out in front of the truck while Bill mans the kitchen. Between orders, Nick tells the story of how his grandmother developed the sauce that propels their business. 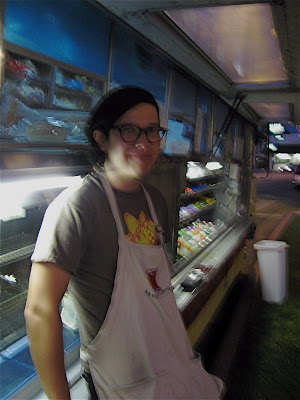 "The story goes that across the street, she smelled a backyard barbeque, and so she just crashed it. She wasn't even invited; she just came in off the street and they let her in and gave her some food, and she was just totally blown away by it. She was like, 'How did you make this barbeque sauce?' and the guy's like, 'I'm not gonna tell you.' 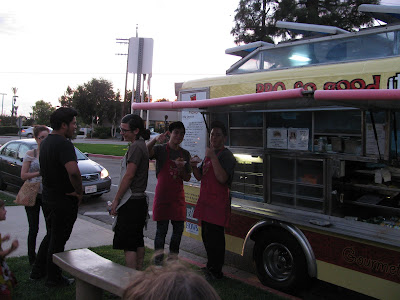 "But basically he gave her a few select ingredients and told her to try it herself. So she got all of the ingredients and went by trial and error, hit and miss. She just showed up in somebodys backyard, ate their food, and made our future."

Nick laughs, "My gramma's a party crasher!" then adds, "She's awesome, but I can't even imagine her doing that, back then or even now."

Kelley says the toughest thing about running a food truck is the long hours; he starts at 5:30 in the morning tending to business and prep, and is on the truck by 6:30am. But, Kelley says, "My favorite part is when people get excited, the love it, and they come back for more. When I'm in Northridge, I have a guy who comes all the way from Simi Valley for lunch. I've got people coming from all over to find me, I've met people from all over the world. A woman from France came with her sister, and her first meal in the U.S. was Smokin' Willie's Barbeque! She loved it!"

Kelley used to bring the truck to Granada Hills on Tuesdays, but had to switch to Fridays when "a certain movie star who I can't name, but he used to be on Saturday Night Live," became a devotee of Kelley's signature style of barbeque and started requesting the presence of Smokin' Willie's truck on set. Yes, it's that good.

Smokin' Willie's spirit of inclusiveness doesn't only extend to family members; because they don't want anyone to leave hungry, this barbeque truck also offers vegetarian and vegan menu items. "Most of the trucks have limited vegetarian fare, very few have vegan, but I have family and friends that are," Kelley explains. "I always get asked, "A barbeque truck with vegan? But it's very popular, we get great reviews." 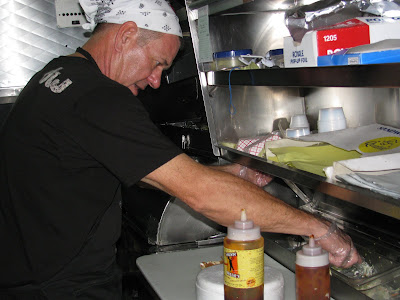 "The vegan taco is made out of grilled tofu with water chestnuts, and we sprinkle some sesame seeds on it," Nick says. "We get a lot of people who are vegans, so we tried to have an option so that anyone can come; we don't want to turn anyone away." 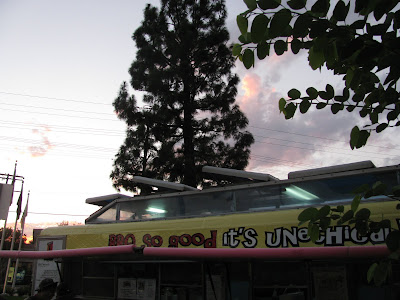