The Crepe Truck Is Coming!!! 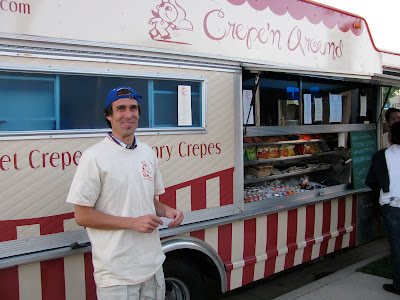 The Crepe'n Around Crepe Truck will be returning to Granada Hills tonight!

In what we're hoping may become a regular stop, Crepe'n Around will bring their love, and their lovely crepes to the corner of Chatsworth and Zelzah tonight from 6:00 p.m. to 9:00 p.m.

"It's a family adventure," says Jamey, who, with his wife and sister-in-law, started rolling out their crepe truck just four weeks ago. "My wife wanted to start a sweets truck, but I didn't think there would be enough foot traffic for only sweets. Then we came up with the crepes idea, because we'd lived in France for a while, and with crepes you can do both sweet and lunch and dinner items."

The couple lived in France while Jamey's wife Eileen attended Le Cordon Bleu to learn the art of baking, and it was Eileen who created the truck's menu, whose big hit on the savory side has been the maple braised pork crepe with toasted walnuts. "But sometimes the chicken's a hit, and sometimes the steak is -- it kinda goes back and forth," Jamie says. The emerging favorite in the dessert category is the nutella-banana crepe, which many like to order with strawberries in addition to or in place of the bananas.

For tonight's visit, the menu will also feature a tunafish and cheddar special ("It's like a tuna melt, but on a crepe") for only five bucks.

The most surprising thing about the new business venture, Jamey says, is how much time preparing the truck each morning for the day ahead -- they do about two hours of prep work in the truck's tiny kitchen prior to heading out. "Now it's a little bit better -- it's stabilized," he says. "In the very beginning, there was very little sleep."