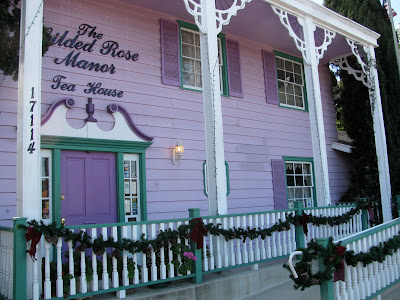 My four-year-old daughter was struggling to comprehend the garish lavender and green building in front of us.

“It’s a tea party place,” I explained, as we walked up the entryway, its banisters still wrapped in Christmas-season garlands on a March afternoon.

“Does somebody live here?” my daughter asked, still trying to make sense of it all. “It looks like a house!”

The fact that Gilded Rose Manor clearly was a house, with few changes to its architecture, is a big part of its charm, and the former residence turned girly haven on Devonshire Street just west of Balboa is all about charm, of an achingly earnest sort. 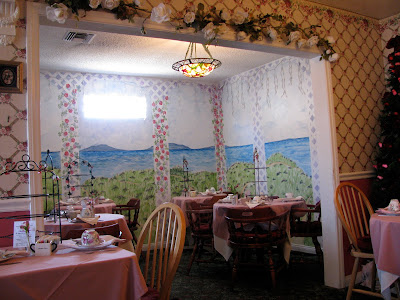 Fake flowers are everywhere—over the doorways, painted on the walls, even adorning the Christmas tree still standing in the corner, and one room is even painted to resemble a faux-seaside scene. Gilded Rose is the perfect place to go if you want to delight a small girl, or humiliate a small boy. Has any male ever dared set foot in this place? It might have happened, but if it did, it certainly wasn’t his idea—it was his girlfriend’s, or his tiny daughter’s. Inside, there’s a single restroom, and although it has both male and female icons on the door, its more prominent signage reminds users to dispose of feminine products in the wastebasket.

Gilded Rose is a temple to tea, not as beverage, but as fetish object steeped in mythology. This fictitious rendering of a Victorian England populated entirely by ladies in flouncy hats and feather boas, I imagine, would leave authentic Brits scratching their heads in wonder and amusement at silly Yank ideas about the proper way to drink tea: only on special occasions, only in special attire (which is provided on a hat rack at the door for patrons who want to play dress-up).

But if you were looking for authentic elegance, you would have taken your tea at the Biltmore or at the Langham Huntington. We all know why we’re here at the Gilded Rose: to revisit the little-girl fantasy of the fancy lady, all grown up, sipping tea from a china cup, nibbling teensy petit fours blanketed in pastel frosting, with pinkies skyward. Here, in the “Victorian splendor” of the painfully pink tea room, it’s all about the faux-elegance, complete with crocheted doilies and mommy’s pearls. 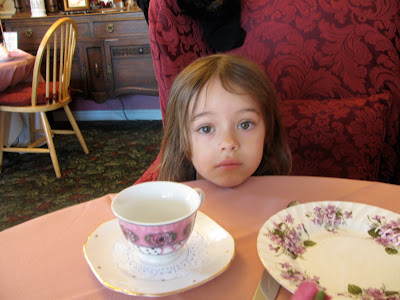 All that said, the tea list was impressive, with an overwhelming variety of choices, and the tiny crustless sandwiches, scones, and cupcakes very well-executed. I felt a bit soaked by the $5.50 “sharing charge” slapped onto the check for the Afternoon Tea, which clearly wasn’t designed to be enjoyed by a solitary diner—would an elegant lady ordering solo really be capable of chowing down on eight finger sandwiches, three scones, and four small desserts all by herself without making an elegant pig of herself? If she did, the elegant belches bouncing off the flowered wallpaper would compete in volume with the Vivaldi suite blaring from the iPod dock in the corner.

But the ladies of the Gilded Rose know that you’re not here in search of a bargain; you’re here for a bridesmaid’s tea, or a five-year-old’s birthday party, or for a Red Hat Society luncheon. They’ve got you where they want you, and it’s tough to put up much of a fight when you’re wearing opera-length gloves and heels.
granada hills Granada Hills blog