Tonight in Granada Hills: The Voluptuous Horror of Karen Black!

January 27, 2010
Oh, how I wish it were true. Wouldn't it be great if you could actually see a Kembra﻿ Pfahler Voluptuous Horror of Karen Black show right here in GH?


Sorry to be misleading, but that headline is just wishful thinking on my part. In actuality, we'll just have to settle for an appearance by the actual Karen Black -- who was actually pretty cool back in the days when she was fighting off possessed Eeeka-Deeka dolls. 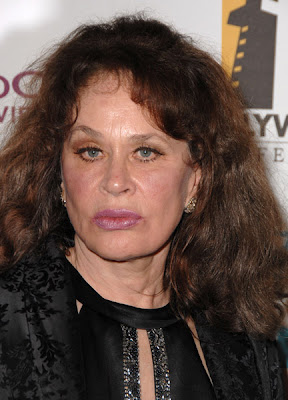 It seems that horror queen Ms. Black -- who is, judging by the picture at left, looks to be aging quite gracefully sans horrifying plastic surgery -- is making an appearance at the ribbon cutting of More Art, Inc., 10667 White Oak Ave., tonight at 5:30 p.m.

More Art, founded by Alison Robinson and Michael Lewis, pledges "to promote and showcase the arts and artists, including the performing arts and the visual arts, stage and film, and reach into the community with educational programs promoting the arts."

One way in which they do so is with their website's "Joke of the week." This week's joke:

Why are fire engines red?

And that's why fire engines are red: because they're "russian" all over!

Haw. With that kind of entertainment and a celebrity appearance, who could resist? You could? What if I threw in some free personality testing? What if I told you you had some engrams you needed to get rid of? What I said that Xenu commands you? Yep, More Art is a Scientology joint.

Here's an educational documentary on Scientology:

And here's an educational documentary on Karen Black:

And here's a Daily News article about More Art for those who are sick of my editorializing.