The Los Angeles Conservancy and its Modern Committee have put up an an online poll so that Angelenos can vote for The best ecclesiastical buildings built during the 1960s. It's the third in a series of polls that began with voting for buildings in the civic/institutional and retail/commercial categories from that decade.

Although the Valley in general and Granada Hills in particular has an abundance of mid-century architectural gems, in the first two rounds of voting, the Valley was barely mentioned. However, in the ecclesiastical round, Valley nominees dominate, and many are in our neighborhood; up for vote are the Congregational Church of Northridge, First Lutheran Church of Northridge, St. Nicholas Greek Orthodox church on Balboa, and Sepulveda Unitarian Universalist Society, a/k/a "The Onion" in North Hills (that's the church, by the way, and not the newspaper).

Knollwood United Methodist Church, located at 12121 Balboa Boulevard, was designed by architect Hal C. Whittenmore in 1966. From the Conservancy's description: "The ultra-modern Knollwood United Methodist Church is defined by its swooping, asymmetrical white walls, including a soaring fin-like tower that evokes a traditional Mediterranean campanile (bell tower)." CurbedLA just refers to KUM as one of the poll's many "eye-catching structures with weird protrusions."

The Knollwood church is pretty good, but I'm going to have to show a bit of GH disloyalty and vote for The Onion (again, the church, not the newspaper) because of its unique shape, Neutra pedigree, and fascinating countercultural history. Plus, I just love onions. 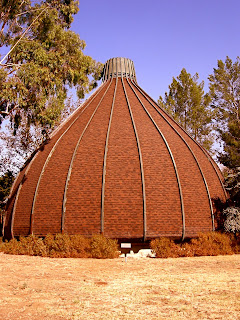