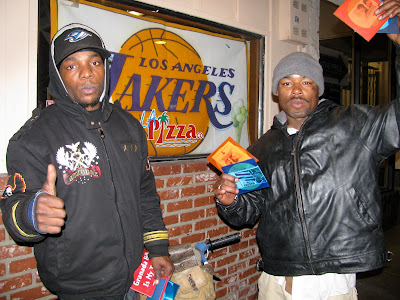 On a chilly night last week, just outside of L.A. Pizza, I ran into two guys on bikes, selling their self-produced hip-hop CDs out of a tote bag.

Can you tell me your name?

My name's Andrew, a/k/a Makdro, and that's my right hand man Zaybo. You gotta put Boogie Man too, because Boogie Man's been helping me since day one.

And what's the name of your project?
It's My Destiny To Make It.

Do you live in Granada Hills? Do you always sell your stuff here?

We I live in Sylmar, and I go where the wind takes me. I've been doing it for about maybe 6 years, I have maybe 80 songs floating around, and this is my fifth volume.

What do you mean floating around? On the Internet?

We've sold actually seven volumes of this type of music; we do two different types of music. We do kind of a Christian hip-hop, and hip-hop for the kids.

So what inspires the music?

I just wanna do something that nobody could have done. And what really inspires my music is me losing my mom back in 2000 -- she had myeloma -- she raised me and all my sisters by herself, with no man, and that gave me courage to do what I want, because she told me never to give up. She didn't give up until her last days and that kinda inspired me believe I can do anything I want to do in life.

Did you bike over here from Sylmar?

Yeah, we bike about five or six miles a day, all around the city, sometimes we even go as far as Hollywood and back, and it's no problem, our cardio is perfect, we're in perfect shape, perfect condition, and we do this in case we have a big show -- we can run laps around these guys that have been putting in all this work.

Where have you played at?

B.B. King's in Citywalk when it was open, Club Gabba on Melrose, Club Minx in Pasadena, a place in Glendale, a hall out there on 90th street -- sorry for not knowing the exact name, but we played there a couple of times. We've already sold 25,000 CDs since 2005, just on the street. I've been keeping track myself -- I don't have barcodes or soundscan, like a company keeping track, but we're for the people, so we don't really need it. When it's our time, God's going to put us in the light.