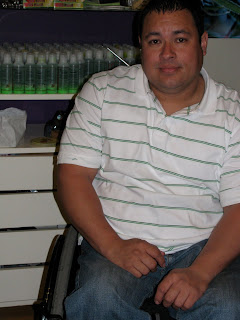 A few short months ago, I reported that Granada Hills had more medical marijuana dispensaries than it did Starbucks.

That is true no longer. The landscape has quickly changed over the course of the past five months, and now there's only one place left in town to legally buy pot.

One might think that any business owner would be pleased to have all of his competition eliminated. But Junior Martinez, the owner of California Herbal Providers, or CHP, located on Chatsworth near Encino Avenue, is actually feeling a lot of pressure, because he knows that as the last man standing, he's under intense scrutiny. "We're the only people they're watching -- and they're watching us like a hawk," he says.

In the recent sweep that shut down every Granada Hills dispensary but one, how did CHP wind up as the sole survivor?

"Because we play by the rules," Junior says plainly. "I'm not just some neighborhood drug dealer. We have all of our permits, we have our business license. This is a family business. It's my wife, my brother-in-law, and me, and even my mom comes in here to clean up and help me open." 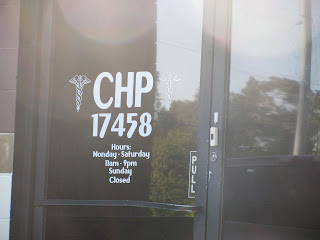 "Yeah," Junior says. "At the beginning she was really scared, and I had to reassure her a thousand times that it was legal. When she started seeing the type of patients that we have in here -- lots of elderly people -- she finally accepted it and she was a little more relaxed about it."

Junior was forced to make a career change after he was disabled by a motorcycle crash that happened just two years ago. "I used to be a mechanic, but there was no way in hell I was going to be able to go back and do that now that I'm paralyzed. I had to figure out something to do, and this was something that I was able to do. So my goal is to be here for the long run, not for the short run. We're not doing it like most of the shops are, make a quick buck and get out."

There are actually a number of things CHP isn't doing like some other shops. "The one up the street at White Oak, the rumor was they were selling stuff out the back door, letting everybody and anybody in, and they weren't paying their taxes. According to the newspaper, I think they found about 400 pounds of marijuana there, which is a lot -- it's way, way too much. That's like a year's supply and then some. And I heard that CEO on Balboa and Chatsworth was shut down for having concentrates, which are a controlled substance."

If the other dispensaries in town had kept their noses clean, CHP might have avoided some the guilt by association they've experienced, but Junior has done his best. "Our goal was to keep the high traffic away from the store. Basically, we kept the kids away -- that's what our main goal was. And that's what seemed like the people up the street from us (the now-shuttered G.H.D.F.) were dealing with -- the younger kids -- because they had the skateboard shop right next door. Whenever we passed by, they had a line of kids coming in and out of there. I think that's what the community wasn't too thrilled about. And I personally wasn't thrilled about it either, because if he's doing it, everybody thinks we're doing it too."

To keep a too-young clientele away from his shop, Junior employed a number of methods at the outset. "Our prices are a lot higher than anybody that was near us -- that was one way to keep kids away, because basically people that were able to afford us were older people with professions and with real jobs. I can't refuse service, because there are some kids that are really sick. I had a young kid with brain tumors -- his parents would come in with him. But when kids would come in here and say, 'Man, you're expensive,' I'd be kinda rude to them and say, 'Yeah, I am, and there's a purpose to it -- to keep you guys out of my shop.' And that's the way we did it, and for the first two or three months I had these big stickers made for the front door that said '21 and over only,' and I got rid of pretty much a lot of them that way."

Junior is also trying to be responsive to complaints he's received about the appearance of the property he leases. "We've been cleaning up the parking lot, we've made the doctor's quarters up front just to give it a nice storefront, and the next phase is to paint the fence, paint the building, change the awnings, just give it a facelift. Our goal is just to clean the place up. The landlords aren't helping us, so it's kind of a group effort." 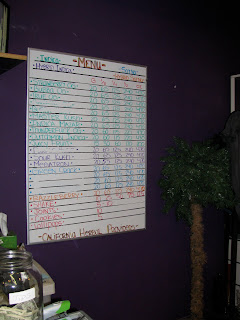 Another way Junior has tried to be a good neighbor: by attending neighborhood council meetings. He says the council wasn't exactly supportive, but that they were courteous. "The council themselves were professional. They heard what we had to say. Of course they're still against it. But there was one lady at the meeting, not on the council, and she attacked us. I thought the poor lady was going to have a heart attack. It was a sight to see, how she got. But my wife gave everybody cards, said you guys are all more than welcome to come, look at the store, we'll show you what we do and don't do. They never came, but they can't say we never invited them."

If any neighborhood council members support the existence of the dispensary, they haven't spoken up about it, Junior says. "I started going to those meetings so they could see the face behind it. I invited them to come over and see the shop, to come and see who comes in here, who we cater to. It's not what they think. For all they know, it's probably one of their neighbors coming in here." He adds, "I remember somebody coming in here and telling me that they used to be part of the Neighborhood Council, and they said there's some that are on the council that do medicate with this. I just wish somebody on there would say something to help us out."

The dispensary's patients run the gamut -- "I have patients that have cancer, chemo, insomnia, you name it, but mainly people that have cancer" -- but the common thread is that a majority live right nearby. Junior estimates that about seventy percent of his clientele lives in Granada Hills; "A lot of people are from right here in the neighborhood, some from right around the corner," he says.

Watching him work, I see that Junior seems to have an easy rapport with the patients that come in to CHP; perhaps it's because he's no stranger to physical discomfort himself. His shop is busy, and although business is good, sometimes he feels overwhelmed. "I open up at 11, but depending on how I wake up -- if I wake up a little too sore sometimes I won't get in until 11:30. That's what's nice about my patients -- they understand that if they come by and they don't see my truck here it's because I'm not having a good day, so they'll show up a little bit later, or they'll call to make sure that I'm all right and I'm here. Cause there's days when in the mornings my body's aching. There's weeks where I feel great, there's other weeks when I have a hard time getting up, everything aches, especially my back, where I have my bars -- I have bars where they're fusing six pieces of my back. Being here six days a week from open to close, my body takes a toll. I'm in my chair all day and I don't get off my chair until I get home. There's times when some of the members come in and they say, "Are you alright?" because you can see on my face that I'm not doing too great. But I've got a service I got to provide, and I try to do what I can."
dispensary granada hills medical marijuana