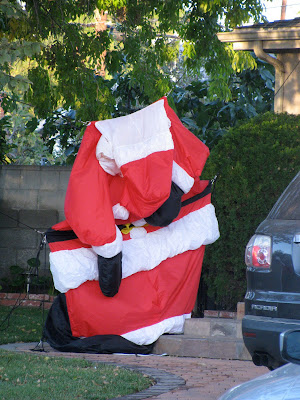 The Santa in a Granada Hills front yard in the photo at left hangs his head in shame and exhaustion. That's because he was erected three weeks before Thanksgiving.

For those who have resisted the pressure to put up Christmas decorations prior to the carving of the turkey, I heartily applaud your restraint.

Despite relentless haranguing from retailers, you have not fallen for the lie they are trying to feed us: that Christmas is something you need to begin worrying about sometime in mid- to late August.

Some wild rebels out there won't even start decorating their homes until December, and to them I say: right on. Stick it to the man. The Santa in a Granada Hills front yard in the photo at left bows to you in gratitude.