Photos Of The New Aikido Dojo And Yoga Studio, Near Trader Joe's And The Tender Glow. 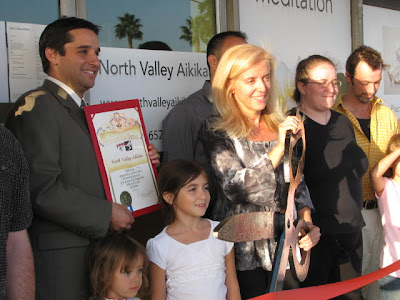 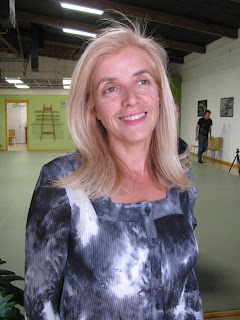 This week, Wayne Addelstein of the North Valley Chamber of Commerce, along with John Bwarie from Councilman Greig Smith's office were on hand to cut the ribbon at North Valley Aikikai, a nonprofit martial arts studio that Lee Lavi Ramirez also plans to make into a center of service to the community. (Disclosure: she's also a family friend.)

Lee teaches the Japanese martial art of Aikido, which differs from many martial arts in that it is noncompetitive -- there is no "winning" and "losing" -- and nonaggressive -- Aikido techniques focus not on how to initiate an attack, but how to respond to one. The dojo also offers classes in yoga, stretching, and Zen meditation.

"In this neighborhood there are Karate studios, and there are a lot of things, but there's no one center that offers self-development type stuff like we have. The whole family can be here: kids can take Aikido, parents can come for classes or special events. My goal is to create a source of innovation for this community, to create a group that changes their surroundings."

Members of the nonprofit perform volunteer work, such as teaching Aikido to a group of blind adults at Junior Blind of America. "Of course instruction is a little bit different, but we just teach them the art," Lee says. "They have some strengths that none of my sighted students have -- they learn certain techniques much faster than sighted students."

Lee also plans to create a "Teen Power Group." The teens, Lee says, "Decide what kind of things they want to do to make their environment better, and then we support them.

"My dream vision would be to have a strong group of adults, seniors and kids, and even if they are not practicing Aikido, they're part of a family, they're involved in this community, and just making it better." 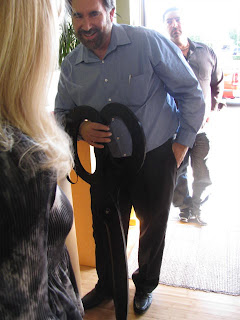 For god's sake, don't run with those things. 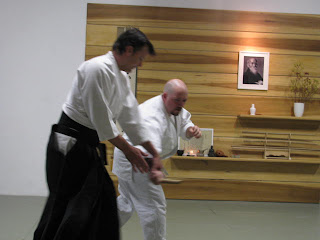 But wot if someone comes at you wif a pointed stick?