August 03, 2009
The following post was written by David Aldrich for his blog, "Pleasant Family Shopping." The original post may be viewed here. Great research, Dave. 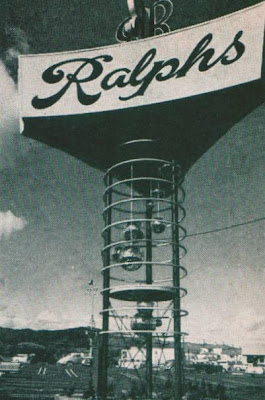 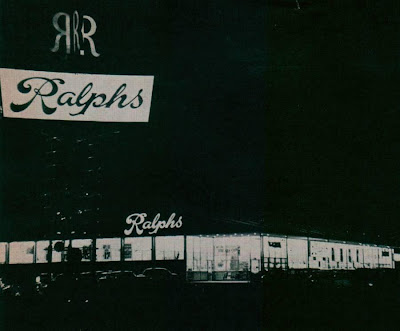 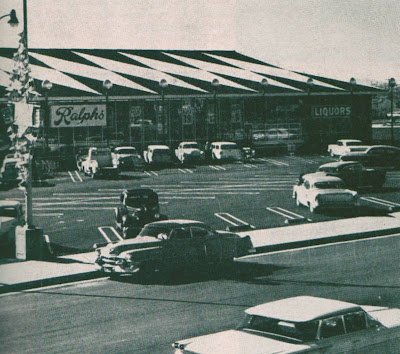 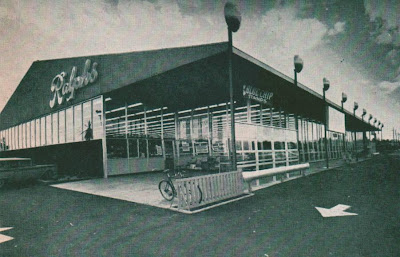 This is none other than the Granada Hills Ralphs, which opened in November 1959 at 17020 Chatsworth Street, at the Balboa Boulevard intersection. This store is a stunning example of the individuality and high-concept architecture that Ralphs applied to its new supermarkets on a regular basis. A Ralphs manager summed up their philosophy for Progressive Grocer at the time – “We try to make each new unit a pilot store in which a good many architectural and merchandising experiments are undertaken - rather than getting a good pattern and cutting the new stores to fit that pattern.”

What a striking sight this store must have been, with its 60-foot tall tower sign out front. If retail store signs today showed such taste and restraint, the world would be a better place, don’t you think? The triple-faced sign featured a rotating quadruple “R” on top and mirrored spheres, long before they were called “disco balls”, suspended below the sign. For those who collect such information, the original cost of the large spheres was $500, the small ones $100. The building itself was an all-pink structure (with a large expanse of glass) with another knockout feature in the store’s peaked roof, which sported a pattern of huge white diamonds against a dark red background, all executed in Arizona natural colored pebbles, described as a “natural rock roof”. Wow. The interior, according to Ralphs’ press release, was “a pale apple green, creamy white and a wonderful shade of soft pink, all accented by the gleam of chrome and stainless steel”.

The store opened with a four-day “International Song-Dance-Food Festival”, featuring 250 folk dancers from 27 nations, the Tinkertown Train, Eddie Cletro and his band, and last but not least, Flippo the Clown. An hour-long live TV broadcast (not an uncommon occurrence for L.A. supermarket openings in those days) went out on the first evening on KHJ-TV. To top it off, there was a preview of the 1960 International Auto Show in the store’s parking lot. Almost enough to make you forget the milk.

In 1965, the store underwent a complete interior remodeling that received a great deal of press attention for its “departmentalized” approach. The peak-roofed structure still exists, though the building has been expanded. Unfortunately, the pebble roof has long since been either been covered over or replaced, the sign long ago relegated to history. It is now home to a Walgreens and a Staples.
Granada Hills blog