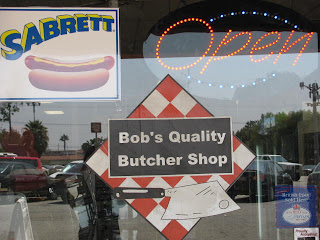 He's recovering from his back surgery. I'm taking care of the shop today. His wife might be bringing him by later.

How long have you been a butcher?

You're not gonna believe it, but it's a lot of years. And Bob has been here for 24 years.

How long have you worked at this location?

Where did you work before you were here?

I can't tell you that.
Okay, so tell me something I don't know about meat.

The muscle tissue of an animal.

Right. And the more the muscle is used, the tougher it is. So like the arms, or the legs. It's tough, like the round steak.

Round steak is the butt?

Close to it. So the more the muscle is used, the tougher it is. So then you have to cook it differently. So Bob carries only USDA choice and prime beef.

Can I take your picture? 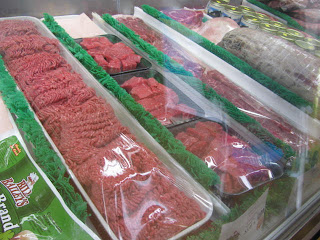 I'll just take a picture of meat then. Can I put in just your first name?

How about if I use a fake name, like Jake?

Sure. I had an Uncle Jake.

What do you like about working for Bob, Jake?

What he carries. When you sell something to somebody, you know they're going to be satisfied with it, because it is the top of the line.

What's your favorite cut of meat?

I think the ribeye, or the prime rib roast.

What part of the cow does that come from?

We don't sell cows. We sell steers and heifers. A cow has borne a calf. That's like a dairy cow. And a bull is the daddy.

Is a steer is a bull that's been (two finger snipping motion)?

A steer is a male, and a heifer is a female, and they have not reached sexual maturity. If a bull is castrated, it's called a stag.

So ribeye is from the rib area, and where is filet mignon from?

That's from the hip, the loin. Doesn't get a lot of work. Very very tender.

What's your favorite thing to go home and cook?

Just some porterhouse or ribeye. I barbecue it. That's the best.

What if I was going to make beef jerky, what would I use?

Use a lean cut of meat, like we slice up the bottom round. You don't want fat in beef jerky.

What if I was making a stew?

Chuck roast. Or shoulder. You can see the stew meat here, very nice.

Yes. You know, Bob is the only American butcher in this end of the Valley.

Where do all of the other butchers hail from?

Mexico, and Iran, or wherever it is. 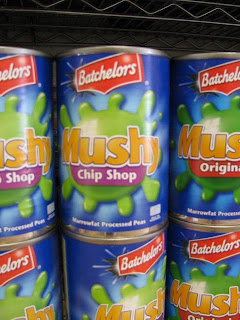 What's the thing with the English products? Does Bob have family from England?

No, he took it over -- he inherited the English products when he took over the business. What I like about the shop is that we sell the highest quality, the top end of all the meats, and there's never any complaints.

When you worked elsewhere were there complaints?

Oh, sure. You could give 'em a filet mignon and they'd complain about it. Depends upon the neighborhood. Some people, you know.

So you're saying that the customers here are cooler?

Yeah, that and they're getting the top of the line meat, you know?

But it wasn't necessarily top of the line other places you've worked?

Oh no. They'll put something on sale -- buy a lower grade and sell it. Here we carry USDA choice, which is the confirmation of quality and finish. You can tell by the internal marbling. Like that stew meat. So you know it's going to be flavorful and moist.

Is this a dangerous job? Have you known people who've been injured?

Sure. Safety is of the utmost. The only time you get hurt is when you're trying to hurry or take shortcuts. Or (winks) talking to a pretty girl. I've cut the top of this finger, the knuckle off there -- they sewed it back on. I put my knife through my hand. 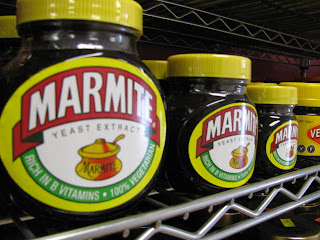 How long have you lived in Granada Hills?

Since the little earthquake.

February 9th, 6:01 in the morning, 1971. I remember it, oh yes. Then I said, we might as well buy a house, there'll never be another earthquake again. Then holy smokes, that Northridge was something.

But you probably bought at a good time -- after Northridge the home prices went way down.

I didn't have the money to buy another house. I've never had enough money for this house. It's hard to make ends meet sometimes. Say, do you ever interview any of the karate places around Granada Hills?

Why do you ask? Do you do martial arts?

I did it. Kickboxking and Kenpo. Circular movements, flowing movements.

What belt did you get up to?

Wow! Well, thanks a lot for the interview, Jake.

I hope you deleted the parts I asked you not to talk about.