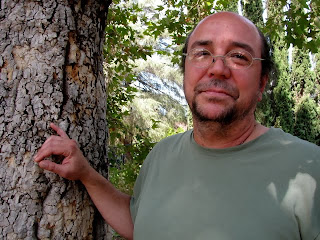 When I tell Greg Harris I'd like to write about him, he demurs, saying, "I'm not really a very interesting interview." But I prod, so he casually relates a brief but absorbing snapshot of his life as a musician: playing at new music festivals; writing original compositions for a ballet company; witnessing the damaged psyches of musicians whose grandiose dreams landed them only in soul-crushing top 40 cover bands, complete with dismal groupies. He mentions the fragile egos of some classical musicians, the work in lucrative but unfulfilling musical servitude, the exhilarating experience of working on compelling, fresh material with his "kindred," and the thrill of watching his own original compositions morph into something even better than originally conceived through work with talented collaborators.

All of this is related in his quiet, low-key vibe; Greg, it seems, has developed a pervasive sense of modesty in spite of, or perhaps because of, his years of exposure to a business glutted with bloated egos and delusions of grandeur. It's easy to see that he entertains none of that, and obvious that Greg didn't begin playing music because he wanted to become superstar; he began playing music because he was compelled to. Begin a conversation on any imaginable topic with Greg and in five minutes, he will relate that topic to the world of music in some intricate and fascinating way that never would have occurred to anyone else in the room. And here he is in Granada Hills, his vast experience and infinite patience at your disposal should you decide that you want him to teach you piano and infect you with his passion.

With Greg, there are no books. Instead of dutifully following of Beginners Piano Book One and Book Two, he favors a more organic approach. "I like to find what music really excites the student, and seeing how we can create an entryway using music that is already moving to the student. I like to keep that as a big part of getting the student started, and I'll use what really moves them as a gateway to talk about theory and improvisation." Greg also isn't in any kind of hurry; there's no budding pianist production line cranking out of his studio. "Philosophically, my general approach is to go a little at a time. People tend to want to get everything very quick, and they're mostly impatient with themselves. My method is to slow people down."

This loosey-goosey-sounding approach, at languid pace and lacking a single text, actually coexists with a rigorous work ethic when it comes to learning to read music. "I don't want to criticize, but when I get students who have come from other teachers, I'll see that they have taken shortcuts, where they've made things easy without explaining why. There's a sort of disinclination towards the work of integrating the written language of music comfortably, because that 's a daunting task for teachers to have to start at square one, how to read. I think a lot of teachers resist that, and the students resist that, so they'll cut corners. But I find that learning the language is absolutely essential. If you learn how to teach it in a way that's friendly and comfortable, it can happen very quickly."

I'd like to be able to say that after my one year of lessons with Greg I'm a virtuoso pianist, but it's just not true. I'm about where you would expect someone who's only had a year of piano lessons to be. I can play a few songs. I can read music, which is more than I could say a year ago, but only about as well as someone who's been reading for one year. Think first grader: Cat In The Hat yes, Finnegan's Wake no. I get frustrated with myself at times, but Greg slows me down and patiently reminds me to just take things step by step, a little at a time.