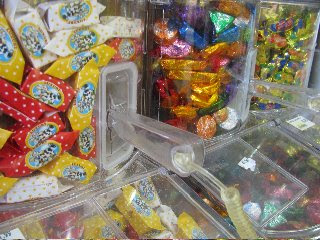 Look at all of the candy!

Sure, there's fruits and vegetables and all of the good-for-you stuff at Victory Produce, but I'm most impressed by the selection of exotic candies at this Armenian neighborhood grocery store.

The confections have enchanting names names like "Kara Kum," "Xarba," "Luxury Cream Fudge," "Squirrel," and my personal favorite, "Clumsy Bear." Many don't have labels in English, but are in mock English, a/k/a Russian. The candy called "Caeq Memeopuma" is lovely, a close second only to "Mnwka Kocoranbin" and the enticing "Mazupobauuaw." Definitely try the other bear-themed offering, "Jypacubui Ohmyopb," and don't miss the crunchy, chocolate wafer called "Cnabrhka."

Once I pried myself away from the candy bins I squeezed and elbowed my way over to the deli counter, where I found an exciting array of cheeses (not that there's ever been an array of cheeses that didn't excite me). Not sure which cheese to pick, I asked the woman behind the counter which one she would recommend, but she only snapped, "Different people have different tastes. I don't know what you like." 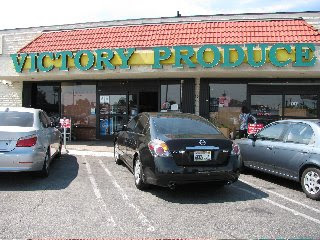 "Which one is your favorite?" I asked, trying to elicit her opinion, but she was having none of my overly-friendly American ways. She had quickly grown impatient with me, interpreting my interest in her perspective as indecisiveness. Sensing I was headed straight for Soup Nazi territory, I quickly chose a French Feta and sallied forth to negotiate the confusing and immobile checkout line.

Even though the lady behind the deli counter might make you feel like a loathsome intruder, you can always flee to the bakery aisle to soothe your wounds with a exiting and unfamiliar cookie. A visit to Victory Produce is like a visit to an exotic foreign land -- one where they don't have customer service, but they do have fresh kumquats, crisp persimmons, fragrant cilantro, and lovely Cnabrhka. 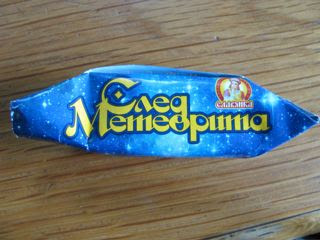 Victory Produce is located at the corner of Balboa and Devonshire in the same shopping center as the Circuit City Church.
granada hills Granada Hills blog