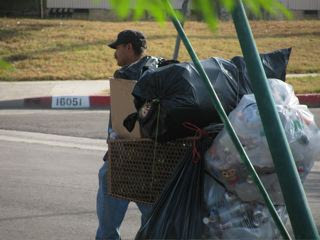 The L.A. Times would call me hard-hearted, but I don't like giving over my recyclables to pilferers.

After July 4th, my recycling bin was stuffed with a wealth of beer bottles and soda cans. So instead of putting it out the night before for collection, I delayed and put it on the street only when I started hearing collection trucks rumbling by.

Minutes later, I heard the clink of bottles and the rattle of a shopping cart as the items were being plucked from my bin by the enterprising fellow pictured above.

Is he hard-working? Certainly. Deserving? Probably. Indigent scum? Not at all. He's clearly just a guy who's doing a dirty job while trying to make ends meet. So why deny him my refuse?

My argument against pilferers has Utilitarian roots. Simply put, municipal curbside recycling programs perform a greater good for a greater number of people, and I feel it's important to keep them financially viable. Scavengers undermine municipal programs by removing the most valuable items for themselves.

In 2002, New York City discontinued its curbside recycling program due to budget cuts. Fortunately the program was eventually reinstated, but I don't ever want to run the risk of that happening here, and given California's precarious economic situation, one can't be too cavalier about the permanence of our city services.

The stuff is getting recycled either way, and that's good, but I'd prefer to see the money go to support more recycling programs all over the city than see it support just one guy.
granada hills Granada Hills blog