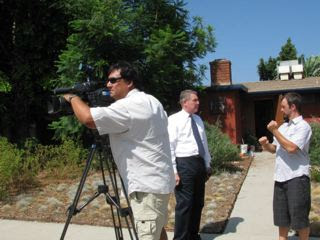 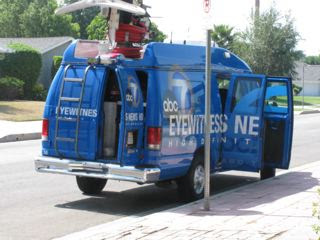 We're supposed to be conserving water, but Porter Middle School either doesn't know or doesn't care, because nearby residents complain that sprinklers on the athletic field are on 24/7.

So one neighbor of the school asked Eyewitness News to come out and do a humiliating piece on the waste, and the news team obliged. I saw their van outside the campus this morning as I was biking past.

Porter has a new principal (the previous one was fired for playing 21 Jump Street), and today was his first day on the job, so he understandably declined to be interviewed for the piece. Luckily, I was available to step in and fill out the empty airtime, so you'll see me on tonight's Eyewitness News, talkin' about water wastin' at my alma mater.

The saturation level is pretty ridiculous over there. I've been jogging on that field and had to swerve to avoid mud puddles. It's certainly not the first case of wasteful actions on LAUSD's part, and it won't be the last. But this one seems so obvious and so simple to avoid. Just turn down the sprinkler timer, people. Is that so hard?

Tune in to Channel 7 Eyewitness News tonight to watch Porter Middle School subjected to its second piece of embarrassing news coverage this year.